Showing posts from September, 2014
Show all

Leveling this time feels to be going really, really slow. Maybe it's just the mid-50s , where there is only 2 dungeon options at level. I've been running Sunken Temple and BRD for the last 4 levels. Looking forward to 57 when my first BC dungeon (HF  ramparts ) comes into rotation.. My gear is sort of keeping up. I still have two items in the 40s. The satchels of useful goods keep dropping the same items (boots, back, helm, bracers). I've been selling all of them immediately. Question. Can my Druid wield a dagger off-hand? WowHead seems to think so. If so, CAN'T WAIT to replace my INT off-hand to something useful. UPDATE: No, it's still considered a ' dual wield '. Loch Modan Not having a 'boost' to look forward to at 60, I feel like I should go back and level up my skinning. It frustrates me to no end that I can't skin the dragonkins in ST. There are just so many... Maybe time to start following a leveling guide ?? So much for leveling
Post a Comment
Read more

What Titan Actually Was. [link] 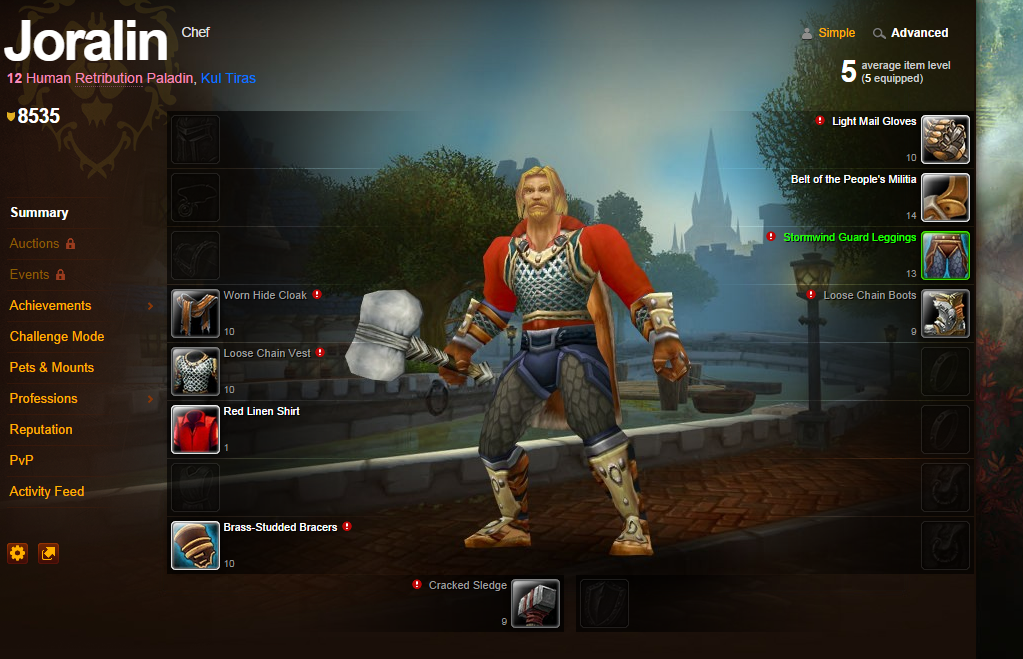 With the name reclaim coming with 6.0, I decided to revisit each of my legacy characters. Deleting those that I started on a whim. Returning back, back, way back to the very first character that I created upon first loading up the game. Joralin, the Human Paladin. When I started, 2 of my co-workers had encouraged me to start playing the game. At that time, they were playing as Alliance on Kul Tiras. About 2 weeks into the game, they  decided to pack up and move to Malfurion. Hence Joralin stagnated at level 12. When looking at him, you'll probably notice how badly he's equipped. To my defense, I was coming from a strict FPS background where every drop could be considered an upgrade. Look this gray weapon is +1 strength compared to this blue one.. I had only just begun to figure out the basics to the game when they converted to the Horde. Will Joralin live? Maybe. I haven't deleted him, yet. With the coming expansion, these same friends are firing up new Alliance toon
Post a Comment
Read more

Have You Designed Your Garrison?

I have not played the Beta. I've loaded it twice and played through the first dozen quests. Shiny! Unlike some guildies, I have never seen level 100, much less 91. That means I haven't made those difficult choices of what buildings I want in my Garrison . You start off your garrison with one small plot, one large plot and a town hall. From what I've read the town hall works as your base of operations (assigning work orders, assigning followers to various positions in the garrison, etc.) As you level up your garrison, you open up more land and more building options. Garrison level 1: 1 Small 1 Large Town Hall Garrison level 2: +1 Small  Medium Farm Mine Fishing Hut Garrison level 3: +1 Small +1 Medium +1 Large Pet Menagerie Small plot options:  Most of the small buildings are based on the professions in the game. If you have the profession and the garrison building, you get perks, like the NPC will sell you recipes for your profession or prov
Post a Comment
Read more

- September 22, 2014
Last night I saw my first Holiday mount! The Swift Brewfest Ram dropped for my priest. Maybe, just maybe this is the year I get all the holiday mounts! Next Horseman's! I am a little disappointed that Brewfest is still dropping 470 items . It would be awesome if instead, 496-510 level items dropped. It does appear that next that will happen.. @Muffinus @gamedale @sporebat @TheCrafticus In 6.0 we can balance power items from holidays to be appropriate without a patch. Wish granted! — Owen Landgren (@olandgren) September 21, 2014
Post a Comment
Read more

Heirlooms, Get Your Heirlooms!

BOA gear closet coming soon? Coming with 6.0, it's been announced that Blizzard is going to give all the Justice Heirloom vendor's a vacation . As you might already be aware, both Justice and Valor Points are being removed as currencies from the game in 6.0.2. As we started to work on new ways to buy Heirlooms, we found that we were setting their value up for a rollercoaster ride. That's because we’re also working on a larger Heirloom system for a future patch, and we don’t want to introduce an interim pricing scheme that could temporarily devalue Heirlooms or limit how we’d be able to give them out in the future. Rather than make players face buyer’s remorse and hand-wringing decisions about when to buy, we’re going to give the Justice Heirloom vendors some time off while we work on improving the system as a whole. As you can guess, if you plan to boost a level 60 toon, and you're still haven't started or have quite a ways to go, you might want to start purc
Post a Comment
Read more

Maximum Molten Core One of WoW’s classic 40-player dungeons, Molten Core, will be available in Raid Finder during the anniversary period for level 100 players. Making it through the underground gauntlet and defeating Ragnaros will reward players with a Core Hound mount and a Warlords of Draenor Raid Finder–quality helm (100% guaranteed!). For a walkthrough of the dungeon as it stands today, check out our  Revisiting Heroism’s Past – Molten Core  guide. I hadn't really thought about it before, but I may not be able to even do this. This will require me to reach 100; 10 levels between release 11/13 and before the end of the anniversary party on 1/6/2015. 54 days. The last week, I've only been able to log about 45 minutes leveling up my druid. I am not sure I'll be able to level up my warlock in 7 weeeks!! I'll work on it as a core-hound mount sounds CRAZY!
3 comments
Read more

As a off and on reader of this comic strip, I really got a chuckle out of this issue. click image to redirect to site.
2 comments
Read more

I was looking into the various heirloom gear options on WoWHead because I'm still not really happy with my Druid's main hand weapon. While looking at the page, I saw a link to a guide referencing the mace. Reviewing this guide, it has some great suggestions, including various gearing options, questing areas and tricks to minimize your time spent. The author suggests avoiding looting mobs unless you have a collection quest and queueing for specific dungeons that you haven't done before so you can complete new quests each run. It's the beginning of the month, so it's about  Darkmoon Faire time.
Post a Comment
Read more

Back in March to June, I blogged about my progress raising a Troll druid from 0 to 60. The overall process took me just under 38 hours, reaching level 61 while inside a BC dungeon. It was a 'fun' endeavor and it was nice to see a lot of the old vanilla dungeons again. Why am I doing it again? Well, a few co-workers are Alliance. Alliance on Auchindoun-US, which is a PVP server. Husband and wife have a wonderful level-25 guild. So after some discussion (around my PC as we watch the WoD announcement) I decide to start leveling up a toon on their server. As I've learned with my last alt, the hybrid model is ideal. I can run dps while questing, then pop tank when I want to hop into a dungeon. As I've already burned my 'boost' (and I don't want to pay the $60 ), this toon will have to make the adventure all the way from 0 to 90 the old fashioned way. Quick dungeon queues and questing. Say Hi to.. Esha @ Auchindoun-US Female - Night Elf Guardian Druid
Post a Comment
Read more
More posts