Showing posts from May, 2013
Show all

Last weekend, I jumped on LFR Pinnacle of Storms and landed into a DPS slot for Lei Shen . Now, personally, this has to be one of the most complicated LFR fights I've seen. Run here, kill that add, stand there, make sure he's against the pilar, now for phase 2... That night, we successfully downed him on our fourth attempt. After watching the videos, I wasn't prepared. First off, you ARE supposed to stand in the goo. There's white goo, and blue goo and sparkly goo. You stand in two, but not the other. On top of that, the ground sparkles and various pieces light up with a neon glow. Looking back at the videos, I wasn't standing in the right place, but running away from it, but standing on a harmless floor tile that was simply lit up with neon. In addition, I could have died if not for some fast acting players who stacked on me when I had the static charge on me. See, I'd always thought of the earlier content as training material. Quests teach you the new
Post a Comment
Read more 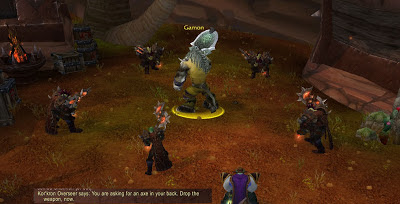 Gamon, I don't understand? You've been beat on for years. Considered a traitor to the Horde, but never have you been so up in arms..
Post a Comment
Read more

With my recent feature post on Amijade's blog , I figured it's time to refresh my user interface post. Below is a sample of my current raiding (questing, rep grinding) user interface. Nothing fancy, mostly like the default interface. I like moving myself, pet, target, and focus down below my toon's feet. This way I can focus on the fight and not need to look around the screen. Here are my addons: Addon Control Panel so that I can swap between AH and DPS/Questing addons. Bartender4 to shrink buttons main rotation buttons down to 70% normal size, shrink main menu and 'out of combat' buttons down to 50% and to create a CYA button bar- on use button (soulstone, fear macro, teleport macro, healtstone macro) XPerl to provide detailed views on myself. Standard interface allows moving user frames around, but xPerl will also include target-of-target-of-target options and "my spells are larger" views. Skada as a damage meter. I like that I can turn off
Post a Comment
Read more 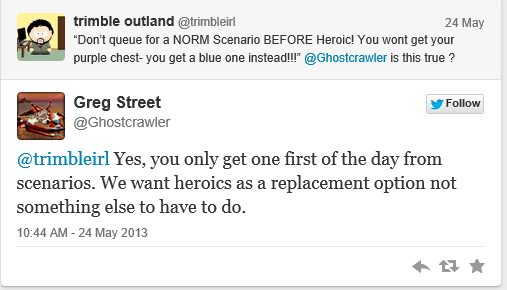 Just saw this on WoW Insider. It bears to note, don't run a heroic scenario with a regular scenario group if you intend to grab the super magnificent loot bucket at the end.   click for more info   sigh, I guess it means back to yelling LFG in trade chat..
Post a Comment
Read more

With the 5.3 patch, Blizzard started along the war of Vol'jin against Garrosh. This series of 'quests' details why the war is going on (alliance and horde) and then what we need to do about it. Start quest line from Lorewalker Cho , and listen to his stories, which lead into the 2 new scenarios Blood in the Snow . Ride between skulls and you can avoid wiping on large fights. and Darkheart of Pandaria . Kill off some adds around the first boss to get 'shield buff' on group. Collect 1 of (3) each relic for an achievement. Fly to Senjin village (horde), talk to Vol'jin. Raid the Kor'kron camps around the Barrens . I found this easier if I simply killed two commanders . They show up as little huts on your barrens map. As DPS, I could simply sit there and kill the boss, I'd get some splash healing. (I wasn't able to solo the one elite I tried by myself, they are all level 92.) You don't have to tag the boss, even grey I got drops from him. Even
2 comments
Read more

Elkagorasa is Closing in on 500!

6 4 years ago when I started this blog to track my warlocks "Adventures in Azeroth", I never really thought it would have lasted this long. It was a passing fancy to work on while at the office. Sort of a mental not of things to do when I get back online. As of this post, I'll be a short 4 posts away from 500 blog posts.  Ok, to be honest, it's not like I can came to compete against my warlock compatriots who love to write. I have been know to do the 10 word post that includes an interesting screenshot . All I have to say is 'thanks for coming back'.  Love the Transmorg? Tired of the turban, I wanted a "gentleman's" look to go with my fancy hat! (too cheap  poor to buy the top hat ) On other 500 news, Elk now has a 499 gear score. Not 'bad' considering back in January, Elk was sporting 460s. While out working on the new ' Battlefield: Barrens ', I picked up an interesting random drop,  Latent Kor'kron Spauld
2 comments
Read more

I was just looking at the talent calculator looking for possible holes in my warlock spec. Going down the list of talents that Elk has selected and ... Soul Leech - Passive - heals based on damage done.  Shadowfury - Instant cast - stun on all enemies in aoe reticle.  Soul Link - Instant cast - share damage with pet.  Unbound Will - wha??? I can remove "movement impairing effects"!!! This immediately brought me to last night's 4 wipes on the  Durumu fight and his annoying eye sore maze and the slow caused by Lingering Gaze . I am putting up a button as soon as I get home! That reminds me, I put a new button on my 'healing' bar the other day. A druid buffed me with Symbiosis . This in turn gave me rejuvenation , a HOT. Not the coolest or most interesting of druid talents, but definitely has a nice niche. You know when I am short a healthstone , lifeblood is on cool down, soul leech isn't doing it and don't want to interrupt dps loop to dra
Post a Comment
Read more

With 5.3 dropping right now, I started thinking back to past patches in past expansions. Blizzard has changed how they did gear upgrades in each of these three expansions and I am not sure I really enjoy this last iteration. Do you remember the panel of Magisters? Wrath was a pain. From what I remember, during the expansion they regularly put out new currency that dropped during dungeons and raids. IIRC, dungeons got heroism tokens, and raids got triumph, the next patch dungeons got triumph tokens and raids got justice, etc.. This kept raiders always one step ahead in gear level behind 'casuals' that could only successfully run dungeons ( /s "looking for group for heroics" ). They did not upgrade, but instead you could use a convoluted transfer system, where one vendor would take X of an older and convert down. If you didn't run the latest dungeons or raids, you couldn't get the latest gear. Cataclysm simplified it. With each of the patches that broug
Post a Comment
Read more

I just watch Danger Dolan's video on why Cataclysm had so many issues. I agree with a lot of what DD mentions, the monotonous grind to get gear. The requirements to do dailies up dailies to get anywhere. I also agree with the lack of flow leveling between zones. You had 5 distinctly different questing areas and no real tie between them other than 'Deathwing broke this.' As of note, I wasn't one of the 'casuals complaining about difficulty'. I totally expected the new content to be harder. Until my gear outstrips the content (like at the end of an expansion), repair costs are going to be high. Sadly I never did see a lot of the Cata raid content. LFR was there, but not as prevalent and when it was I was heavy into PVP.
Post a Comment
Read more

- May 16, 2013
I dread the moments running through my daily scenario. It typically is quick and easy now that Elk is running in 490+ gear. Only when we have someone who's never ran the specific scenario is there typically any chance of a wipe (typically due to over pulling). So when I was reading through the PTR notes, I got excited AND disappointed: Heroic Scenarios A heroic difficulty for Scenarios have been added and are designed to provide challenging content for small groups of well-seasoned adventurers. Completing a Heroic Scenario awards Valor points, and a chance to obtain Raid Finder quality items. Heroic scenarios require a pre-made group to join. Heroic scenarios offer bonus objectives that will reward additional valor if completed. An option to run a random heroic scenario has been added as a drop-down in the scenario tab in Dungeon Finder. Players can complete a normal or heroic scenario for bonus valor each day, but not both. Six heroic scenarios will be avai
Post a Comment
Read more

Where are you hiding Scout Captain Elisa?

- May 15, 2013
Yes, Elk is doing his dailies. Surprised? I really want the rep with the Sunreaver's so that I can get the commendation . That way when my priest opens the area up, she'll earn rep a lot faster! So, we're trying to turn in Compy Stomp  to Scout Captain Elisa . I met her at the entrance to the zone unhidden, now she's hiding somewhere under a shield of invisibility. Unfortunately I can stand on top of her ?  but no zone, no silence, nothing. This video has made me realize that maybe it's bugged. Watch closely at the beginning, or fast forward to roughly 10minutes 10 seconds . The player runs in and out of the cover. It's absolutely, plainly visible in the video. I stood there last night a few times and nothing.. Tag support? Or drop and re-run the quest? Try tonight and let you know what I find... Update : I opened a ticket last night with support. I could check on the status of that ticket now, IF I had brought my authenticator to work... So, anyway
Post a Comment
Read more

Last night I experienced my worst case of LFR fail. You know the kind you wait 10 minutes to get there, then wish you never clicked the "Accept" button!? My first thought was "That was awfully quick!?". I typically run through a scenario then dungeon then the raid pops. Not last night. As soon as I dropped out of my scenario, I was immediately dropped into Pinnacle of Storms. Ok, sure, that's got a tough boss fight and I could see a lot of turn over. Enter the instance and people are dying to a Thunder Lord  and a Lightning Lord. If you haven't run this raid, they are the first trash you hit in the raid. People had logged off, people were leaving, people were complaining in raid chat! I went through 4 deaths, one even looked promising where we had all 25 players and made the run up the electrified stairs. Not enough healers, so we all died on the top of the stairs. It was the players saying "there's a group of us all the way at Lei Shen " (
Post a Comment
Read more
More posts