Showing posts from March, 2013
Show all

PVP "Ninja" Priest mog Wrath brought us the wonderful addition to grinding rep, the champion  tabard . No longer did casuals like myself have to actually do quests in order to become exalted with every major faction in the game. LOVED IT! Need more rep, run another dungeon! My priest didn't even have many flight paths, but she had rep with the various factions! With 5.1, Blizzard introduced the Grand Commendation of ____ . This wonderful little perk basically doubles your rep gain for each thing you do for a group. I grabbed the commendation of the Tillers when I hit revered on Monday. I've managed to do the dailies about 3 of the 5 days this week and have managed to complete 97% of the way to Exalted already. Complete the dailies still in my queue from last night and I should be exalted by the end!! Point? I still need Dominance Offense rep. I still hate the dailies in that zone. I manage to die at least once a day due to an over-pull of mobs. There's ju
Post a Comment
Read more

I guess I can't complain...

I guess I can't complain about loot drops in LFR this week. Last night I hopped into Nightmare of Shek'zeer LFR (nice write-up ). Each of the boss fights went pretty straight forward, nothing too surprising. My only problem was on Amber-Shaper where I was transformed during the last 5% of the fight. At that time, the DPS wasn't too interested in getting me out of the amber. So, I started testing out my abilities . I could consume amber and heal, I could do some kind of melee attack, I could attempt to free my self (but really just a self interrupt) and I could attempt to break free if below a certain health. So, my point. Last night, each of the three LFR bosses dropped a tier token for me. Chest Legs Hands The legs and chest were both upgrades for me, but according to AMR , the hands were not. So I returned the hands (still have token) in hopes that the upgrade system makes them more viable later on. I at least now have the 2-item set bonus . Why return the ha
1 comment
Read more 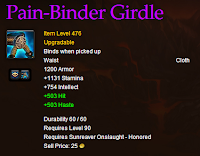 4 days of dailies for the Sunreaver Onslaught and I've gone from neutral to honored. Nice. Of course it doesn't hurt that there are anywhere from 12 - 19 daily quests to complete. At honored, I was able to pickup this new belt for 300g. It was a decent upgrade from what I had before . I completed the first of the raid's last night in the Heart of Fear LFR. From the Blade Lord Ta'yak fight, I won a new pair of bracers . As a note, don't use an Elder charm when you have already won the bracers. I simply got 2 sets of bracers. FYI, I hate this boss fight. Without a run-speed bonus, I was not able to finish this fight. I simply could not get out of the way of the tornadoes to avoid all of them. Maybe a potion? I ended up dying at the end of the hall where the boss first ' blew ' us. I like this strat, if I could have only reached him the first time... An easy strategy for 2nd phase is this: When you first reach him, keep applying DoTs. When Boss HP is
2 comments
Read more

coming later as you open the island? I am liking the new 5.2 expansion. I logged on last night around 8PM and had a lot of fun exploring Big Thunder Island until almost midnight. (too bad no Thunder Island railroad!?!?) Why? REP! First off, rep . First thing I did was queue up for my daily dungeon and my daily scenario. Upon firing up the console I was asked "who I wanted to gain rep with during my run?" Of course, I picked Dominance Offense, so I can continue working on my grabbing the 496 gear. After running that darn mogu temple, and that scenario where you escort the brewmaster panda home, I had gained ~1000 DO rep and 70 valor points. There are other options right? I seldom see them...  Valor gear! Speaking of valor points, as Nibuca commented on in my last post, my valor DIDN'T reset!! Woot! In fact, I found the cave where the Shado-Pan Assault is held up and purchased my 522 necklace . That one purchase put me over the 470 gear score for the next
Post a Comment
Read more
More posts