Showing posts from January, 2015
Show all

It's All About that Base. 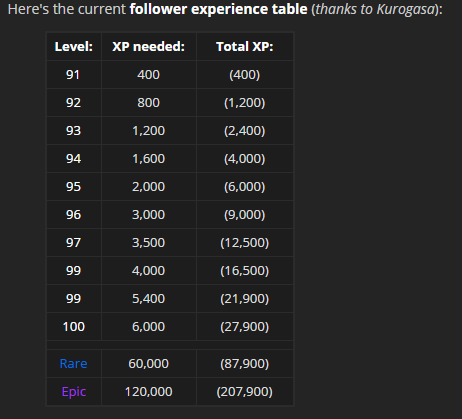 The integration of the garrison into the questing in Warlords has been a love/hate for many players. You either love that all of your current, plus a few other options are right there, or you hate that the sheer number of options. You either love having a place that you can 'call your own', or you hate that on your realm, it's laggy and (still) kicks you out regularly. Either way, if you're playing, your likely doing those garrison quests. That means, hiring, leveling, assigning and even gearing up those followers for even better and better missions. This guide on WowHead really helped shed some light on various followers. Did you know that you can level your followers beyond level 100? I hadn't. I stopped running +XP missions except to level my lower level followers. There's a diminishing returns bringing too low of level follower on a mission. I thought I found an awesome way to level up those 93-95 followers by carrying them with a couple 100s ru
Post a Comment
Read more

- January 29, 2015
As a dedicated Windows phone user, I am always looking for apps to make my life a little easier. Unfortunately the app market is still in such an infancy that there are not a lot of GOOD options. Sure, like ios and Android, there are loads of trash apps, fart sound boards, personality tests, time waster games. Unfortunately, not many major developers have jumped on the band wagon. Audible hasn't updated their app for 2 years!! Starbucks is only third party apps, so no flashing my phone to pay. Today, I found a Blogger app that looks very promising, Pin Blogger. See and read existing posts, see comments, and as I type, post to my blog.. Speaking of mobile apps, Blizzard where's the love? ❤ You give us this awesome time sink in garrisons, garrison missions, yet no way outside the games to schedule them. I have followers sitting idle because I am at the office and don't have access to the game. I'd love to be able to check their status, apply upgraded if their in m
Post a Comment
Read more

Blizzard, Why no universal seahorse mount??

Spotted feeding in garrison. In Cataclysm, I worked to get the seahorse mount. I thought it would be cool, to hop on this underwater mount and explore all the various areas. Hordes of Horde would mount up on our sea-stallions, while another battalion mounted sparkle ponies and fly in from the air for an EPIC Stormwind raid. (Alliance could head for Orgrimmar, also right on the ocean..). Timeless Isles, I mount up on Mystery , and chase the giant shark Evermaw around the island, keeping yelling to everyone in zone with his updated location. So... two expansions later, the seahorse is "grounded" in Vashj'ir. Instead we are forced to hope for a generous  warlock , be playing a druid  or if you are very, very lucky, have fished up a sea turtle with it's awesome 60% swim speed. If you want players to explore the ENTIRE game, help us out. I think there are a number of treasures (possibly even mermaids, aka naga) hiding down below the oceans of Draenor, but I h
Post a Comment
Read more

The other night (before Black Temple), I was trying to get into a few dungeons. To avoid the stress of tanking, I jumped into the DPS (i.e. werecat) queue. Sadly after 45 minutes in queue, I check the 'queue status' to see 0/1 Tank 1/1 Healer 3/3 DPS. OMG, go figure.. It's all my fault no dungeon... I hop on YouTube and watch the Grimrail video to get an idea of what to do on boss 2 (1 and 3 are fairly straight forward). I queue up and happily drop into this very dungeon. Managing to get through with me dying (to trash of all things). Yeah over-pulled coming up to the boss 2. Happily no wipes. Sadly no loots worth anything for me (i615 replacement of existing i630 crafted item).. In fact, the Tavern quest netted me only the ' bloody bandanna ' which sparked the run into BT. Salts includes how to get the differences between normal and heroic, plus the achievements in the dungeon. Here are each of his videos for the level 100 dungeons.. Everbloom: Grimrail
Post a Comment
Read more 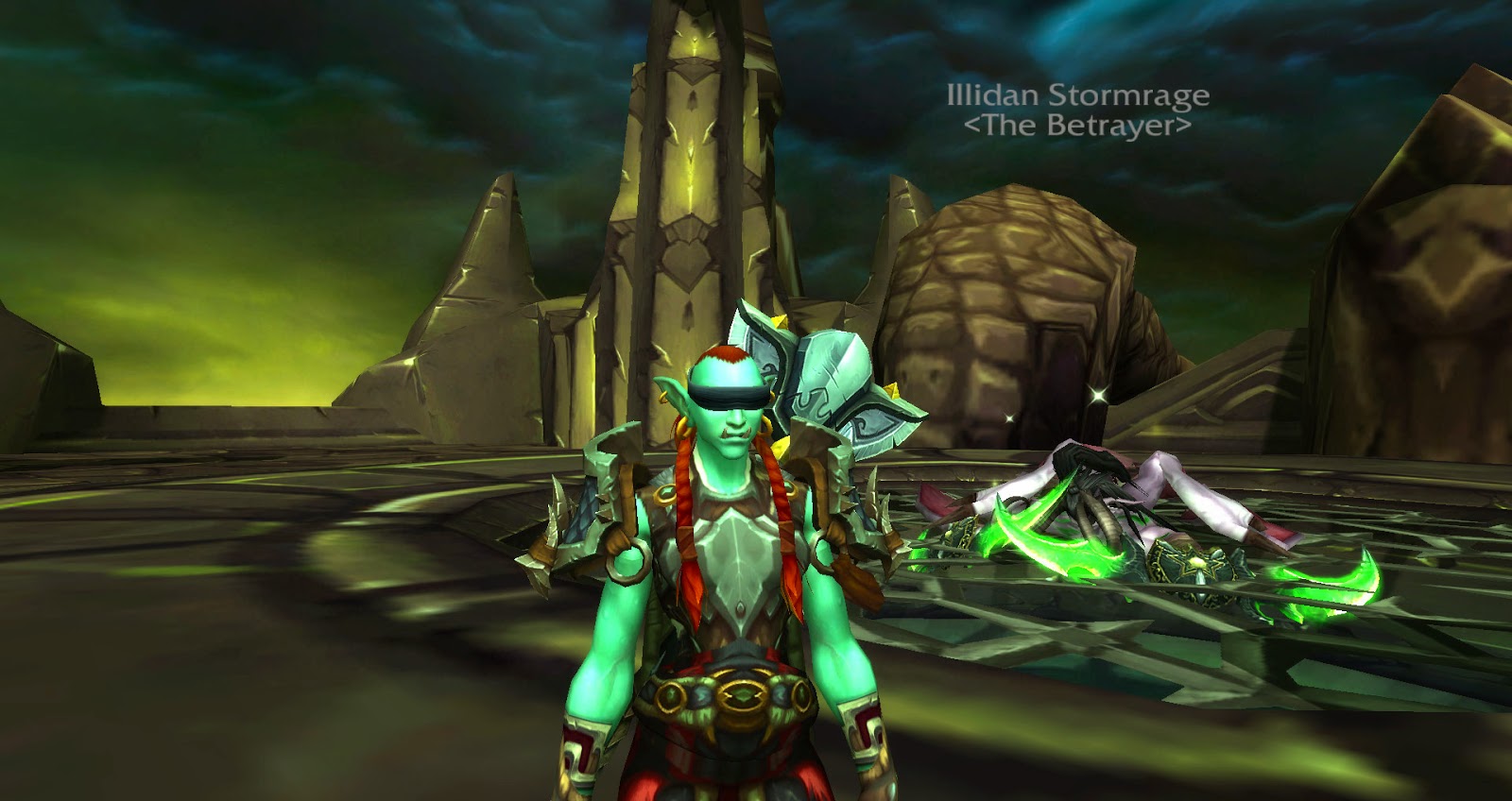 Last night I decided that it was time to head back to the Black Temple and finally attempt to pickup Illidan's headpiece . It was extremely easy 30 levels over all the bosses and they only progressed to phase 2 where it was required by the boss. Since I'd never ran Black Temple at level, I found this quick video by Nobble extremely helpful. He points out an easy order for killing the bosses so that you can get into see Illidan. (counter clock wise). It was more helpful for me to simply find the best path between bosses. As I've stated before, it's SO EASY to get lost in these places!?! :) It's funny running through this as a raid, after seeing it as the warlock scenario to get green fire. Many of the same bosses are here, except the warlock scenario starts at the front door and Akama takes us straight for the Essence of Anguish. To get there, I took the portal.. Yep. Back to Panderia, taxi'd to Temple, then portal to Shatratth. I've now set my
Post a Comment
Read more

One more to 100... The other night, I got my guardian druid, Esha, up to 100. Happily was in the middle of the Nagrand quest chain, dropping traps and gathering leathery animals. As with Elk, I ran the proving grounds and got my 610 staff. I was able to one-shot it, because of a mechanics difference. As a tank, if you don't finish the last mob before the timer, it lets you slide... As long as your healer doesn't die, you're good. I haven't tried running Silver yet as I still don't have the 610 to get into Heroics, so no hurry. Looking at Arielle's video, it looks more than do-able.  I managed to get into a random Everbloom. What a mess. Problem number one, IMO, the DPS didn't know the fights. Sure, it was my first run as tank, but still. On spider boss, DPS was leaving the Pale One alone, he'd inhale the goo, enrage and then start attacking. Spider boss gets a big tasty snack! Mages we pulled while healer was OOM. On Yalnu, we had tons of flo
Post a Comment
Read more

Why Should I be a Herbalist in Warlords?

- January 06, 2015
Since the beginning of time, Elkagorasa has been an alchemist and herbalist. This meant he would always pick his own materials for alchemy potions. Want one more healing pot? Go fly out and grab some of the herb he needed.. Done. In Cataclysm, I even spent half of a level just flying around and grabbing plants. This gave the XP required to jump up to the next level, plus level up his alchemy. With Warlords, I have a level 3 garrison farm. I've talked to the tender, and asked him to only plant Frostweed plants, so now I am making all the Frostweed I would ever need for my alchemy needs. I am only picking plants out in the wild now, because I happen to be standing on top of it. " oh, look pretty.. ". Now that I am trying to gear up for raiding, I am starting to think that herbalism may be a dead art in Warlords. My warlock no longer needs to compete with druids in flight form to pick those rare spawn herbs all over the realm. No longer do I need to fly for hours, lookin
Post a Comment
Read more
More posts