Showing posts from January, 2012
Show all

- January 23, 2012
Friday night, I tried the raid finder one more time. Happily, I popped right into a raid, no bugs ('cept for I fell to my death ) and they weren't finishing the last boss fight. I found them busy clearing the trash mobs before the slime boss. Slime boss is basically a game of follow-the-leader. Attack boss, kill slime add (usually first on DBM list), follow prompts from DBM, repeat. Token for tier shoulders drops, I lost.  Last boss, Hagara, kill everything, don't stand in frost, run from the bad looking things, kill the pilars, kill adds near little towers that popup, zap all of them with lightning (exactly opposite of what the boss yells at you "you can never charge all my towers!! buwahaha"). Token for pants drop, I lost again. OK, I wasn't expecting much, but the frustrating part, even though I lost both rolls, I can't roll again on these bosses again this week. I'll try again tonight and hopefully get to see the first three bosses.
Post a Comment
Read more

The Protect IP Act  and corresponding SOPA is a broad reaching act coming up to Congress that has some dangerous implications. Establishes a system for taking down websites that the Justice Department determines to be "dedicated to infringing activities." The DoJ or the copyright owner would be able to commence a legal action against the alleged infringer and the DoJ would be allowed to demand that search engines, social networking sites and domain name services block access to the targeted site. In some cases, action could be taken to block sites without first allowing the alleged infringer to defend themselves in court. Unfortunately for a blogger like myself, this could be rather painful and detrimental to my blog. My blog could permanently disappear off the face of the earth. See, despite my unique URL, I am actually hosted on blogger.com . Google is an international company, with an indeterminate number of blogs hosted on their service. Potentially if only one of
Post a Comment
Read more

Great Reference for Traveling around Azeroth

The Wowhead blog has a great reference posted on Sunday that details many of the methods of traveling around Azeroth. You might find other methods of getting from point A to point B. Outside of /camp setting up a little tent for you, this provides a nice break down of all the portals, zeppelins and trinkets available in-game. There are numerous tabs on each destination, so poke around.
Post a Comment
Read more 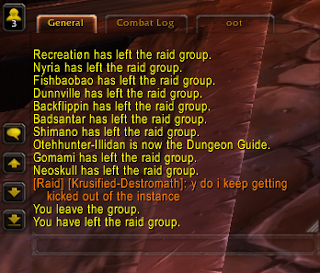 The fates are conspiring against me.. Tonight, I tried my second run at the Raid Finder tool. Tonight, I had to accept that 0 of the bosses were down, then ported in. When I got there, 3 seconds pop by and I am back in Orgrimmar. Teleport to dungeon again, "you are not in a raid, please port home, or you will be sent to closest graveyard.". Happily that graveyard was back at the AH in Orgrimmar. After 2 minutes of this, and requeueing to fill blank spots, I gave up and went to run the dungeons 3 times. Valor - no gear. By the time I actually get in there, I won't remember the fights!!
Post a Comment
Read more 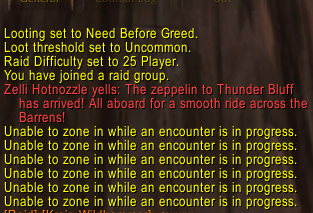 Today I decided to try my first run at the Look for Raid finder. I click on the button, queue up. Walk away from my desk "13 minutes: 1 DPS, 0 Healer 0 Tank". I come back 5 minutes later, and I see I am now in a raid. Ok, let's get in there... Followed by in 1 minute. I finally zone in, and they've just killed Hagara the Stormbinder . Woot! I win! But since I wasn't there, no loot.. :( Now, does this mean someone zoned out in the middle of the fight of the last boss?
Post a Comment
Read more

- January 12, 2012
OK, so I am finally ready to run the Dragon Soul LFR raid. Gear iLevel 378, enchanted with as many cheap enchants as affordable and fitted gems in all slots. To prepare myself (and not look like a total raid noob in front of a bunch of strangers), I like to read strat guides, or watch a video revealing the fight mechanics. One site that's just come up is L2PTV.com . L2Ptv or Learn 2 Play's main focus is to provide new and learning players guides and videos on how to play their class, guides for various zones, and even raid boss mechanics. The part I took advantage of, was, the raid bosses . The videos, each about 2 minutes long, provide a quick over view of the boss, visuals of the mechanic plus a nice how to deal with each mechanic. Morchok = run to crystals to decrease damage, stand back for stomp, stand behind pillars to avoid aoe when he throws them off him. As a subscription service, there is a lot of content they've marked premium and has some interesting potentia
Post a Comment
Read more

Who said I wanted to date my add-ons?

With the 4.3 patch, a number of my favorite add-ons have quit working "Out of Date". While I can simply work around the error pop-ups (or even suppress them), I'd rather not have that overhead, especially while in the middle of a battleground or dungeon. Nothing more irritating, than having that 'inspect' dialogue box popup while in the middle of a fight, over and over again. Unfortunately, as minor addons, I don't expect any updates on them very soon. TBag by Shefki Way back in BC, I had an issue with my install of Warcraft where my bags would not display correctly. Instead of simply reinstalling the software (it was on 4+ cds, plus all the patches up to BC and my internets were not very fast), I went with an addon. TBag is my absolute favorite for this purpose. It's biggest strength is that it SORTS . Yeah, sorts your bag view into areas. Food, drink, bandages and pots are at bottom, quest items at top, gear is along the right, and other miscellany
Post a Comment
Read more
More posts