Showing posts from November, 2011
Show all

The Arena season is ending tomorrow. 4.3 patch is most likely going to drop too. (Season 10 arena buy back issues). With this means, the usual currency devaluation. All your high-value Valor or Conquest points, will be converted to the lower value Justice or Honor points. Gear that was formerly out of reach (like that beloved Tier 11 warlock set) due to ill-performing raid team. Combine that with a late start to the Arena team making only the 7800 limit to get the weapon. I am personally looking forward to some transition recession upgrades. Sleepy Gladiator Set Elk is STILL running around with that 353 " dog-collar " of bones. I know, there is no helm money can buy, but there does appear to be a decent one dropping off the new dungeons. At the moment, my priest is running around with 3 pieces of Ruthless gear (chest, weapon and belt). I'd love to see the legs and head replaced sooner than later. As soon as the next arena season fires up, I am sure we'll
Post a Comment
Read more

- November 23, 2011
When leveling enchanting, don't bother going to the auction house and purchasing a level appropriate item to enchant. I suggest going to the Enchanting Supplies vendor and purchasing Enchanting Vellums. When combined with a ATSW, I click create all and then simply click on my stack of vellum. One, two, three and done. No longer need to confirm that I want to replace +5 spirit, with +5 spirit on this pair of gloves.
Post a Comment
Read more 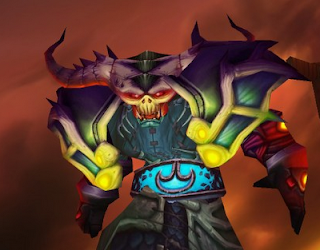 Last night we were (again) a few people short of a full 10-man raid. Darn you school and work, how dare you. So, being the ill-tempered warlock, I demanded that we run the BC Hyjal instance. I really, really wanted to pickup the Malefic (Tier6) warlock helm. After much discussion, we had 8 people convinced to run the raid. (Only 8% away from guild level 25 was a selling factor). By the time we all reached the raid entrance, we had 10, picking up a husband and wife team who just happened to log on to level up. This was a first time for a number of us, so this was a learning adventure. Items learned: Raiding has changed quite a bit since BC. Hyjal focused on numbers (trash mobs coming in 8-10, boss had 8 million health), less on 'don't stand in the ___' mechanics.  A raid group with, average level 84.5 and iLevel of 360 can get through the entire raid without a healer. OK, yes, after several consecutive trash fights, running around doing hellfire, I was down at 60% he
Post a Comment
Read more

November is the time of the year to reflect. Look back at those people that have made a substantial impact, providing support, and My Mentor Warlock Bloggers - When I started blogging about WoW some 2+ years ago , there were only a few people out there. These bloggers actively posted new content on their sites; helping others play the game and improve their blogging. As I started blogging, I wanted to find a niche that these bloggers didn't currently fill. I never saw raiding in my future. I hadn't realized how much fun PVP was going to be. I wanted to communicate about my warlockery, but as a dad of 2 who needed a place to place links. Nibuca , Fulgaris , I couldn't have lasted this long, without your blogs, comments and linkage. Even without posting anything for months, Nibs you are my still #2. Elkagorasa.info all-time highest traffic source. Other bloggers that I liked to bounce ideas off - These bloggers have been around at least as long as myself
5 comments
Read more 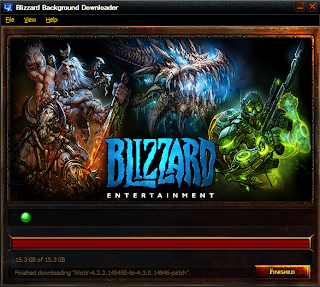 With the arena season ending later this month, my estimate is that it will correspond with the drop of 4.3. Numerous guilds have reached Ragnaros and are going to start getting bored. Players who can't reach Rag, like myself, will be excited when the new dungeon content comes about and the valor point system changes to 150 valor for all heroic dungeons. But my biggest reason why? The downloader has 15gb of data downloaded to my PC. Now, this means, my arena team has possibly two more nights before the season ends. I am hoping that my disc priest is able to reach an 1200 arena rating before end of season. My druid partner, thinks my arena skills are improving and we're definitely sticking around. He's already looking to start me in a 3's group next season. If only our timezones weren't so disparate.  Until then, time for some shopping..
Post a Comment
Read more

Beware of the Gnome Clone-inator

This looks like fun, if you're interested in starting to play PVP. A bunch of Gnome Clones are going to take over. This based on a long forgotten run done by Alas and a few of her friends back in Vanilla. 5 gnome locks running battle grounds, both a cuteness and deadly combination.  If you're interested, head on over to  http://revengeofthegnomes.wordpress.com/  and signup. They have all the details and name variants taken. They're planning on all playing, shudder, mages! (Which based on my arena experience, is a good combination). I can just see hitting a battleground as Horde, being tagged constantly morphed into an animal (sheep then frog then cat...) or ice blocked. With 10 mages, all with their elementals out, ouch!
Post a Comment
Read more

Halloween, er Hallow's End, brings along with it a ton of nifty toys.There's that helm that laughs out loud. There's that pet jack o lantern, that follows you around. There's that flaming flying warlock mount, that should be given to every warlock at level 70. There's all the cool, vomit inducing candy that no longer provides a useful buff ( candy that's good for you, bah! ) Lastly, there's the non-druid, non-channeled instant mount. It comes in two flavors, magic and flying , both of which are magic and fly. After 2 weeks with this mount, it's loss is measurable. Gathering - Sure, I can dismount, pick flowers (1s), mount back up (1s). Now using the broom.. dismount, pick (1s), mount again. That's a 100% decrease in time spent per node!! Now, if I really wanted to pick enough plants for say, 10 flasks, that's an approximate (80 twilight jasmine/ average 2.5 per stop) 32 stops. That's a half hour of my life lost, simply because I rolled a w
2 comments
Read more
More posts