Showing posts from June, 2015
Show all

After the compromise last week on no-flying ever again, I decided it was ok to restart the rep grinds for mounts. Flying out to Netherwing ledge reminded me of the Sha'tari Skyguard  and their mountable rays. I remember hating working on this rep at level and had only made it to Friendly. Over the weekend, I read through the guide " Nether Ray in a Day ". This guide details all of the quests that are available for this faction. One commenter pointed out that you can technically you only need to do the repeatable quests (if you don't care about other faction reps). So I flew up and started the grind. Some hints if you're just starting. Kill everything in the zone. Everything gives rep. (Ok, I don't know about the lizards, but they probably do too). I fly into a hub, and start spamming rain of fire over everything. The mobs give 10 rep, their little pets give 5, those fast orange birds give 10 rep and even the treants give 30 rep.  The skettis have a hi
Post a Comment
Read more 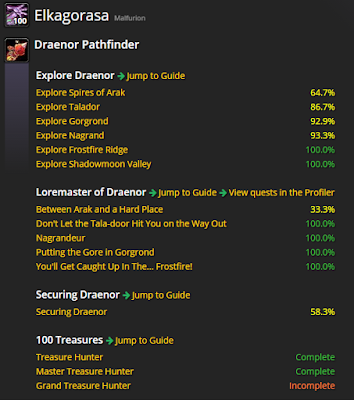 Blizzard has made a (somewhat) reasonable compromise to the 'no-flying' decision. To open up flight in Draenor, you basically, need to have done everything on one character. Mastering the Outdoor World In an upcoming Public Test Realm build, we will be introducing a new meta-achievement called Draenor Pathfinder. You’ll earn this achievement in Patch 6.2 by mastering the outdoor environment of Draenor— exploring Draenor’s zones , collecting 100 treasures in Draenor (there's a  200 treasure achievement ), completing the Draenor Loremaster and Securing Draenor achievements, and raising the three new Tanaan Jungle reputations to Revered. Initially, this achievement will award a rylak mount: the Soaring Skyterror, one of the native beasts that roam Draenor’s skies. Players will remain ground-bound on Draenor until a small follow-up patch (6.2.x), when all players who have earned Draenor Pathfinder on at least one character will unlock the ability to fly in Draenor on al
2 comments
Read more

In a LFR, and desperately need repairs? Dungeon just wiped again? Take a second and
Post a Comment
Read more

1) First epic flying mount 2) 50 mounts achievement 3) Long Strange Trip achievement I totally understand your logic.  In Warlords of Draenor, you've spent countless hours developing rewards and quests around never flying. Treasures hidden throughout the Nagrand that are only reachable via flight. Bosses hidden deep into level 100 zones that drop mounts, toys and epic gear. Having the option to helicopter into a zone , drop on the destination, then airlift out immediately bypassing all that design , glory and, well, basically all that work you've done. But what about all the work I've done? I get the feeling you're planning to throw, my 20 flying mounts , all in the trash . Windrider is simply a cat mount with wings . Drake? Yeah, funky dinosaur . Red Flying Cloud is now a low hovering fog bank. That $25 sparkle pony I bought from the Blizzard store? Dumb wing-clipped pegasus! Check out my $25 dumb wing-clipped pegasus mount This got me thinking..
Post a Comment
Read more

Why did I complain about DPS Proving Grounds?? It's Easy!

It's finally over! Despite all my ranting and complaining, scheming and whining, I have managed to complete the DPS silver proving grounds. This time I invested $30 and purchased Wondershare's video editor , so the graphics quality is a ton better than the free Windows Movie Maker.  The ah-ha moment for me was remembering that the Felhunter / Observer also had an interrupt. This allowed me to still run as destruction (not having to relearn demo) and have an instant cast, non-targeted interrupt. There's one typo in the video, that I am not sure I'll fix. At 6:03 , I say, "move to 3", when it should say, "move to 6". Round 1: ( 0:12 ) Cast Havoc on slayer, and focus down the guardian. Round 2: ( 0:41 ) Cast rain of fire on vermin, then focus down slayer. Round 3: ( 1:22 ) Move to 3 o'clock, cast havoc on amber weaver in center, focus down far slayer, then move to close slayer. When done (if time) setup portal facing center. Round 4
3 comments
Read more
More posts