Showing posts from March, 2015
Show all

Today, while trying to finish the Kalimador Tamer achievement, I ran through Sithilus. Hey, while I am here, AQ, maybe I'll get one of the insect tank mounts. Yeah! First trash, I get the mounts! Blue, green and yellow!! Woohoo! So I log out and hop to my warlock to grab my screenshot and then I saw the flavor text. This (relatively) domesticated silithid is at home only in the desert sands of Ahn'Qiraj.
1 comment
Read more

Thanks Tome Of Ancients 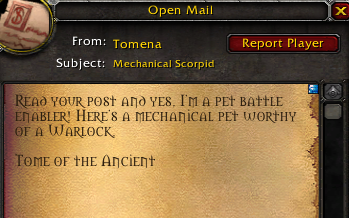 What an awesome surprise.. So, in honor of my new pet, I've renamed her Tomena. She's already done me proud by winning the daily battle against the Quintessence of Light. Thanks for the mechanical scorpid! Update: Well, thanks Tomena?! I spent 4 hours last night, running my priest around doing all the pet-battle quests. Guess what happened, she leveled. 90 -> 91. Sure half that XP was from opening the garrison, but she hasn't even gone far enough in the quest line to open the first profession building.. 45 achievement points later, and almost 2am, I have now completed the Taming Kalimdor and  Taming Outland achievements. At 94:100 for Master Pet Hunter and 210:250 for Going to Need More Leashes . Only need "Magic" for Family Reunion . I guess, I should head back to Winterspring and look more for the Snowy Owl . Lots of alpine hare and chipmunk, but never saw this guy.. I did pickup the clockwork bear though!
1 comment
Read more

Probably due to my wife's OCD rubbing-off on me, but I hated having the pet menagerie manager pestering me with a quest , that I had no ability or desire to complete. Sure, I could level up my pets from Ashenvale up through the various zones, until finally reaching max level, but why would I want to?! Last weekend, I followed up on a comment by Grumpy Elf . He mentioned that I take the short (one-time) quest, Unearthed Magic , from my menagerie manager. This quest is available once on each level 100 toon. This quest provided me the Ultimate Battle-Training Stone . Someone mentioned that you should use the stone on either the Molten Corgi or the Terrible Turnip as they both have abilities that leave 1 health. Allowing you to tame more pets! I chose the corgi for my starter pet. This left my pet party with a level 25 corgi, level 11 blighthawk and level 9 blizzard bear . The corgi was enough alone to carry the fights for the Pets versus Pests quest. Each is a 1 (pest) vers
2 comments
Read more

Over Reaction to Proving Grounds

Not so bad.. Ok, I have to admit, I've given the proving grounds a bit of a hard time. Last night, I decided to give our relationship a second try and it wasn't so bad. Really!? Last night, I was consistently making it to wave 5 or 6. A couple times, I saw the last fight. Worst off, I know what I am doing wrong. Moving way too much on this last fight. I think I need to stun the closest amber weaver, let far amber weaver encase the healer. So I can focus down the healer while he's disabled. Due to my short term memory, I've started making notes of what to do. Primarily I want the positioning, so that I am not running between the two locations, mid fight. I think of it as a giant clock, with marks at the quarter hour with the 'front' edge is at 6 o'clock. Right off, I have put up my portal from 6 to 3 and parked my doomlord at the 9. Havoc lizard (right) focus fire down guardian.  Rain of fire on varmints, focus down lizard, fire and brimstone to
1 comment
Read more

- March 02, 2015
BlizzardWatch , fka WoW Insider, has a wonderful segment hosted by Adam Koebel, Bosses in 5-Seconds . This is similar to what, like Salts does for his tanking guides, in that it provides a quick summary on the boss mechanics, focused for LFR. Last week Adam posted a short write-up of the 3 newest bosses released Hans & Franz, Flamebender Ka'graz and Kromog. This is definitely something I want to keep on-hand. Always great to have something short and sweet to quote if all is going terribly bad..
Post a Comment
Read more

Sunday, I had a few minutes, so I completed a speed run of Zul'Aman. During this speed run, I did successfully get the Bear-ly Made It achievement. Sadly, I didn't realized I needed to loot the bear. I thought (like this commenter) it would come in the mail, or immediately drop into my mounts (like ICC Raider achievement). The mount is in  Kasha's Bag , which drops from Halazzi’s prisoner. The bag is in a corner of the room, and is not immediately obvious. You have to loot the bag. I thought maybe the mount would come in the mail, or become automatically known. Not so. Loot the bag. Thinking about it now, MAYBE it's in my bags.. Geesh, hate when I think of this at work. On the otherhand, my druid may need to run this dungeon soon.. Soloing this dungeons is effortless at 100. I ran straight to each of the bosses and was able to engage them. Sure I aggro'd mobs along the way, but I could AOE them down. Now, they are all level 85, so those 15 levels meant they di
Post a Comment
Read more
More posts