Showing posts from June, 2013
Show all 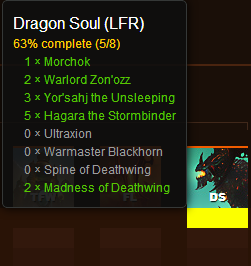 So, I was going through my Armory profile and was thinking back to why I hadn't finished some of the Cata raids. Sure, the Deathwing fight was odd and quirky, but I would like to say that I completed it. Sadly, at level, I couldn't ever see the first fights. OK, I landed at Ultraxion once, but due to it being first week of release, LFR failed miserably. After that first attempt, I never landed in any other fight than the hoping, madness fight. Blizzard, with the new "Flexible Raiding" proposed in 5.4 (at least last I heard), how about opening up some older raid content. No, wait, that's not really what I am thinking. I know, I can already pre-make a group and run older content, if I get myself to the entrance, blah blah blah. Existing Raids: LFR priority option - "first available or entire raid only?" I'd like to make this option changeable where I don't need to re-queue (and wait a new hour). Only want the valor, let me queue to fill any
2 comments
Read more

- June 18, 2013
WoWJuJu just posted a short teaser about Virtual Realms coming in 5.4 . This feature will basically allow multiple low-population realms to be combined into a new virtual realm. Toons will be able to interact, trade and even sell/buy things off a shared auction house. WoW Insider pointed out that this could, in fact, allow you to mail items to your own toons between realms (assuming your realms all join together). With Blizzard's new push for pre-made groups, I see this as a saving grace for these realms. I sat for about an hour in Orgrimmar last week waiting trying to build a 3-man Heroic Scenario team. Malfurion-US is a medium population Central time zone PVE server, so there isn't a ton of people on mid-day of a week-day. Merging the population of a number low to middle population servers would be wonderful. As with the speculation, I am curious how they intend to do this? My current battlegroup, Shadowburn , contains 18 realms; 13 PVP (and RP-PVP) and 5 PVE. I'd H
Post a Comment
Read more

Saturday night, after equipping my new gear (bought bracers , got bulging heroic quest drop belt , equipped non-tier items), I thought, why not, and continued the Warlock quest line. You know the one for green fire. I am stuck on the first meta boss, that big floating head . (feel like I am in Wrath dungeons again...) (video is a play-through so if you're not wanting spoilers, don't watch). skip to 39min 30sec Viewing this video, I think maybe I am making it too complicated. My setup: Demonic gateway on either side of the dungeon Demonic portal immediately behind gateway (use port - face gateway). Void lord on boss Shadowfury , and brimstone front and center as giant buttons.  I did: Dance with boss and use voidlord as tank and terrorguard. When Lost Souls spawn, run for portal and jump across dungeon. AOE lost souls. Shadowfury on boss during his AOE stage. Repeat. Sadly, the best I've seen is him down to about 30% health. I usually get overw
4 comments
Read more

Sadly another Warlock blogger is taking a break from WoW. Cynwise posted on his/her tumblr page the other day that he has put a hold on his subscription for medical reasons. I’ve cancelled my sub until my hand is better.  It’s not a permanent thing, but I’m going to take  some time away from Warcraft and let myself get better. Cynwise has been the driving force keeping me involved in WoW PVP. Early on, he provided super simple diagrams  (and in BG emotes) to help us 'think' about each BG and reminded us that fighting away from the nodes is just dumb. "Wars are not just won with the flesh and sinew of troops, they are won with the mind, with intelligence and knowledge!" ( deployment ) Recently he's been working a deep dive of warlocks, leading into all classes of the game. I'd like to think that this has brought about some dramatic changes by Blizzard to how Warlocks are played. They may not directly attribute the simplification of the tale
1 comment
Read more

and other services includes race change and name change. In the past, I had thought that my choice of Elk as an orc was wrong and considered doing a paid race change. The orc racial, blood fury , is helpful, but is there another Horde race that would have made for a better warlock? Hey look at the health of Cata-Beta Elk! See while leveling and first getting into a new expansion, the  Blood Elf   Arcane Torrent  comes in extremely useful to regain a quick fix of mana, but after mid-expansion, it would only really be a filler spell.  Troll   Berserking would be useful on any DOTs, as we warlocks can always use more spell haste. Undead healing and no-fear racials always look useful in PVP, but for PVE I am not so sure. Finally, the Goblin alchemy bonus or rocket barrage could be useful in certain situations, but once leveled up, what does +10 alchemy give you but a bump into the next expansion. Bank access could be nice in rare situations where I am questing and left some
3 comments
Read more

[W]e’re in the process of developing a new Flexible Raid system, which includes a new difficulty that sits between Raid Finder and Normal difficulty, while still allowing friends, family, or pick-up groups to play together. This difficulty will be available for premade groups of 10–25 players, including any number in between. That means whether you have 11, 14, or 23 friends available for a Raid, they’ll all be able to participate. The Flexible Raid system is designed so that the challenge level will scale depending on how many players you have in the Raid. So if you switch between 14 players one week and 22 the next, the difficulty will adjust automatically. Keep in mind that unlike Raid Finder, no matchmaking is available, so you’ll need to make sure you invite people to attend—but if some can’t make it, it’s not the end of the world (or the Raid). You’ll also still be able to invite Real ID or Battle.net friends cross-realm. Who you choose to bring and what Item Level gear they’
Post a Comment
Read more

As Garrosh continues to gather precious resources for his war effort, only to be thwarted by rebellious Horde forces in the Barrens, he starts to look into alternate locations. He falls back to his, resource rich, former home, Nagrand . Garrosh has already proven to us that he will do anything to progress his agenda . He has drilling operations, animal slaughter, clear-cut lumber operations and even strip mining to gather resources. Would the Mag'har align themselves with Garrosh and support his efforts? Or will we see Thrall's wife, Aggra  get directly involved with the war effort and she'll take on the as leading resistance. I see some favorites with Nagrand. Like B:B , it will get players back into older zones. Nagrand is already rich in resources (assuming Nesingwary  hasn't killed off all the animals), plus already listed as a 'contested area'. Hitting Aggra's homeland  may enrage Thrall and get him full-on engaged against Garrosh. (Why else would
Post a Comment
Read more

25 Warlocks vs Heart of Fear

"We used everyone's demonic gateways  to minimize our threat. Using the gates  almost every 15 seconds for the buff." A friend shared this album with me. It is series of 12 screen captures from a 25 man raid team downing all 6 of the bosses from the Heart of Fear . The cool part, they are all warlocks ! I think this is pretty awesome that 25 clothies are able to take down current raid content with only our pets. Despite Blizzard saying that we won't be tanks, this shouldn't be possible if true. We should be squashed the first time the boss looks at us.. What made that run doable was the using of multiple voidlords tanking the bosses, and by tanking I mean taking a few hits and dying (+ of course all our survival and self healing abilities). Because locks can easily manage their aggro (through gateways and soulshatter), you could infinitely rotate pets tanking with no issue. ( source ) Just to make our intent clear, the Glyp
Post a Comment
Read more

When Should I Break Set Bonus? 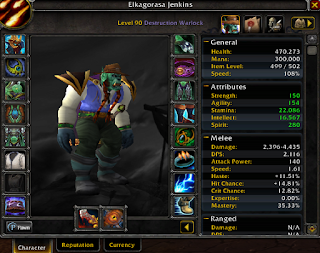 In my drive to break the mystical ilevel of 500, I ran 2 different LFR raids. In each, I was lucky enough to get a new loot drops that are upgrades a current item. Hands: Sha-Skin Gloves (483) -> LifeDrainers Sordid Grip  (502) Chest:  Sha-Skin Robes (483)  -> Robe of Midnight Down  (502) 502 in my bags, not on my back. I haven't equipped either piece yet, because they'd break my 4 piece set bonus  (and because AMR doesn't say to). The way I currently use Dark Soul: Instability is to buff my Chaos Bolt spells. Build up 4 full embers, trigger DS, then fire off 4 Chaos Bolt, watch for crits! (Saw one crit for 900k damage, awesome!) This increases the CB damage typically by about 30% (250k to 400k damage each time). So, when does the overall gain of jumping from ilevel 483 to 502 outweigh the gains from the set bonus? Or am I way over due and now that I have 2 better items, I should replace them both?
Post a Comment
Read more
More posts