Showing posts from January, 2013
Show all

Why Blizzard, why? Sunday night, I jumped into LFR Mogu'shan Vaults at Boss 2. Not by choice, by accident. I wanted to see the entire raid. Anyway, I hit Greed/DE on loots that I couldn't use. Now I am locked out from rolling on the boss again until, until today?  Still annoying.
1 comment
Read more

Well, ran my first LFR last night,  Mogu'shan Vaults  (part 1). I was really surprised on how easy it was. I queued up, thinking I'd have 10 minutes to spare and started searching for videos to prep me for the fights and spotted this one by Big Nash . " LFR has become Patchwerk 2.0 ". 2 minutes into the video and I am convinced that there's nothing to worry about and, really, there wasn't. I dropped in right after they finished the first boss. Running along, I catch up as they are running up to the second boss. AOE trash, fight boss. Playing a warlock, I just stood back in the rafters and maintained my DOTs and shot off Shadow Bolts. If I felt ambitious, I ran to a nullification field  (looks like blue Disc Priest barrier ) that the tank dropped as part of fight the mechanic. Last boss, of the raid is a troll fight. Interesting mechanic involved  troll totems that popped up around the boss. They look just like the troll mask pets that you can get f
1 comment
Read more 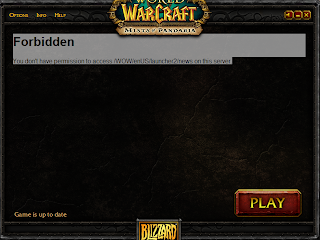 Today is the day that my account renews. I was seriously considering putting my account on hold for a few months. Those guildies that raided, have disappeared. My friends who ran dungeons with me, stopped. I logged on the first time this month and all those friends on my real-id list show "over 1 month" as last logon. It's a lonely, quiet place. For kicks, I logged on last night and ran some randoms (3 scenarios and heroic Scholomance). I find scenarios really fun. I can typically connect in only a few minutes (>5), some different mechanics in each one (bombard bugs, fight monkeys for beer, use fireworks on attackers). Plus the daily reward isn't half bad. Afterwards, I was sporting the skin of Professor Slate . While polymorphed, you get a little + Nature damage buff . Nice! Fun! I've reached 460 average iLevel. I am ready for LFR, I think. Probably should browse the raid videos and see what's out there to prep me. I was peeking at AskMrRobot again
Post a Comment
Read more

Hmm, never thought about Triceratops before...

but why not? We have an entire crater full of rapters and some really big annoying TRex like beast that ate my priest while leveling there. Why not other dino-mounts? Heck, why not, raptor mounted cannons too! My 6 year old son has a collection of fighting dinosaur toys that Blizzard could use for models in 5.3. This one comes with a tow-hook, in case your goblin trike get's stuck.
Post a Comment
Read more
More posts