Showing posts from May, 2015
Show all

Trying my hand at video recording, I captured my latest run at doing the proving grounds. I am now regularly reaching fight 8:8. The 'ah-ha' moment was realizing that the Felhound and/or Observer have an interrupt. Here is my 200dpi (yeah, it stinks badly) video of my last run, with notes for those who are still working at it. I'll record it again tonight (actually sort of excited about this) and hopefully work out all the bugs for that last fight.. As Grumpy Elf said, it's all about placement..
3 comments
Read more

- May 29, 2015
A friend shared with me this article that details the WoW 1.0 beta and what we should be expecting.. Very exciting news! WoW 2001 Computer Gaming
1 comment
Read more

As I sulk here in my tears, still not successfully completed with the silver proving grounds, I have started to wonder is it me? I mean, there are numerous complaints on the various forums of people that can't seem to break this through barrier. This simple  little thing, has prevented me from moving on to bigger and brighter, dare I say it, legendary things. QQ The idea of the proving grounds is to replicate a raid environment to test how well you can deal with it. By passing a silver proving grounds, you should have proven ideally be a decent DPS. I should be able to be picked up by a pug for a normal raid and not wipe the group. As a DPSing member of a raid group, my responsibilities are: Damage Dealing :  DPS   - The role of DPS is to kill the monsters. This may sound simplistic, but it takes skill and know-how to dish out powerful damage without overwhelming the group's tank and causing the monsters to attack you.(source wowwiki ) Kill the target(s) . The tan
7 comments
Read more 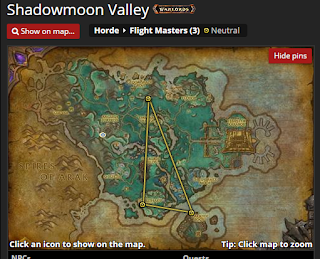 Really quick, there are three flight paths available to the Horde that land in Shadowmoon Valley. Two (in south) of them you get sent to as Garrison missions. I found the easy way to get the top flight path, is via the Shadowmoon Burial Ground dungeon. At the end you are offered a portal, which takes you outside the dungeon. Simply run up the road from there to the north flight path. This location is great if you are doing your stable dailies. The talbuk is close to here and so is Great Tusk .
1 comment
Read more

Last night, after I finished my dailies for the Netherwing, I decided to go run Ulduar for both the achievement mount and hopefully, Mimiron's head. 30 minutes of emptying bags, and turning in quest items, I finally show up at the entrance of Ulduar. I then spent the next 3 hours gathering achievements, until I had to give up for the day (2am local) and go get some sleep. Let's start here.This quick 6 minute long video is based on running with a level 100 toon. This is extremely helpful in seeing the fights from that perspective before hand.. Orbit-uary - This was easier than mention in the video. When your DPS is doing 1 million damage using the main (button 1) cannon, why use anything else.  Iron Dwarf, Medium Rare - I am at 8:25 dwarfs at the moment. It appears that the main technique is you have to do damage to the dwarf after the boss is pulled down. As a destro warlock, my technique was to splash a rain of fire over their mole machine. This would aggro them fo
2 comments
Read more

So Blizzard, don't stop, you got a great idea!

- May 19, 2015
With Time Walking dungeons coming to WoW in 6.2, there are a number of people calling for tw raids! I'd like to propose a slight variation. Ok, so as I recently posted that I am working on mount gathering, both from reputation rewards like Netherwing, but also legacy raids, like ICC and Ulduar. Running these raids at 100 is menial. In fact, with these raids, it's detrimental to run many with a minion as they will often kill the adds and boss too fast. I may have to attempt a few achievements naked or with a different, lower level toon in order to kill them slow enough. So, I'd like to propose variable dungeons and raids. Let's call them Normal and heroic. Normal would be tuned a so that your group is at, or even little op. You could potentially solo the content, but not easily. 3-man group would be ideal. Whereas Heroic level would be tuned 3 tw levels lower. You'd do about 5-10% less. It would be similar to running a heroic version of the content. (I suppos
2 comments
Read more

Tonight, I plan to start working on my Netherwing  reputation. This is the faction, that sits way out in old Shadowmoon Valley, under Black Temple. WowHead quest progress. (/) Where to start? As of this moment, I am HATED with a capital H by this faction. Checking WowHead is awesome. I points out that the last quest that I completed in the Introduction chain is Karynaku . Two more quests and I'll become an ' Ally of the Netherwing '. This final quest provides (without buffs) 42,000 rep! But.. Being that my guild is level 25, we have Mr. Popularity  and it's Darkmoon Faire week, so there's WHEE ! (or the Hat , buying 4 to last weekend) that will add another combined 20% rep to the gain. 42000 + 4200 + 4200 (50,800 reputation gained). The first 42k moves you from Hated to 0-Neutral. 4200 moves you from Neutral to Friendly (1200:6000). The final 4200 will bump me 600 short (5400:6000) of Honored. Rep required per level And then... I can start the que
1 comment
Read more

Borrowing concept from GrumpyElf Khadgar may not be bad as we previously ( tinfoil hat ) thought.  Very unlikely he's the end-boss in WoD, if he has a spot in the upcoming movie. Blizzard WOULDN'T pull a GARROSH and have him continue on into the next expansion would they? Right? Ran LFR Slagworks last night (Monday) After killing off the Heart of the Mountain, I looked back up the way and saw a purple loot, aka treasure chest. (Right next to where the trash reside.  Can't find it on the loot list on WowHead .  Sadly I had already accepted the next invite to part 2. NoooooOoooOoo..  Blackhand was the only complete wipe I saw.  We wiped 3 times.  Later, I tried to run back (after Blackhand), but it's gated and you can't.  It's gated every way possible. Guess that prevents noobs getting lost in LFR. Have to run it again later this week and check again..  My lock is reaching the end of gear upgrades in BRF LFR.  Crafted upgrades (sure)
1 comment
Read more

I've been nominated for a Liebster Award by that Grumpy Elf hunter over at the aptly named   The Grumpy Elf . Thanks for sending this over my way. Rules Write a blog post about the Liebster Award Thank the person who nominated you and link to their blog Display the award on your blog Answer the eleven questions that the blogger who nominated you gives you Give eleven random facts about yourself Nominate five blogs that you think deserve the award Create eleven questions for them to answer List the rules in your post Inform the bloggers that they've been nominated and provide them the link to your post So lets get on with them questions. What is your favorite expansion of warcraft and why do you think its your favorite? Wrath of the Lich King would have to be my absolute favorite. I started with WoW a few months before BC. This meant that my friends already had max level characters that were actively raiding. I wasn't able to really participate wit
Post a Comment
Read more
More posts