Showing posts from April, 2014
Show all

Was reading over at BBB , and someone posted links to a previous Orange County Choppers: Alliance "Good Guy Bike" here has a lot of flair. Check out slides 8 and 10  for the crossed swords handlebars. Curious about the flashes in the video of finished bikes, I finally stopped on these two slides. Neither of them look like the the 'good guy' bike or the ones based on the builds.
Post a Comment
Read more

Ok, cliffhanger from episode 1,was there is 'bad news'. Today that's revealed to be the build is due in 5-weeks (instead of 10). What does THIS mean? IS the plan to have this release with WoD? 5 week build of real bike, then voting for 5 weeks, then digitizing for in-game for last 5 weeks. Say 15 weeks until release of game??  :)   Probably not, I bet the December release date if fairly firm (landing 1 month after Blizzcon). #TeamHorde get's vicious looking front forks! (coming EP3) Or is the plan, 28 weeks till Blizzcon, so have the results of the voting done before then and then the big winner revealed, on stage, in front of all attendees. I'd love to show up there and pose on the Horde bike personally.. :) I guess that depends on Blizzard's release schedule. Is Episode 3 a week or a day after today's release? 25 days to build the bikes, probably an episode every other day (show more progress), for 13 build episodes. My guess, they are already a
Post a Comment
Read more

Fantasy Apps! What Smartphone apps would your character have on their ‘fantasy phones’ Azeroth? ( source ) So, the goblins have just finished developing their wireless communication network, GobNet, and is now marketing phones. Elk is quite the bleeding edge kind of guy and has already bought one. It weighs 4 kilos, takes up 2 bag slots and has a smoke stack.  Here's his top apps: WhereToBoss? This lovely little app is simply GobNet's GPS app. You put in the coordinates for your destination, which can be pulled from the 392 page un-indexed, unsearchable, online manual. You can download the manual, but you'll need to purchase the additional storage to do so. It will also point out all the goblin vendors along the way to your destination, make suggestions for hotels and inns ran by goblin caretakers. BattleNet This wonderous app is a side-load from the Alliance platform, but still works on GobNet phones. It provides up to date stats on arena and
Post a Comment
Read more

So, leveling is still going on with my druid tank. She has reached 47 without any controversy. Tanking so far via the dungeon finder seems to be a ton of button mashing. I have my tanking abilities and simply mash them as the cooldown pops. Probably not the most efficient, and I'll probably want to prioritize them if tanking a raid, but works for 90% of the dungeons I've hit so far. Only when say a warrior or paladin hop and aggro first do I tend to have to chase mobs down... Not a "crusader" no crusader heirlooms. With that, I've started searching out more guardian tank sites to link to. You'll see the "Tank Talk" section now on the side bar including a link to " the Inconspicuous Bear ". The author contributed a nice write-up on wowhead about beginner guardian tanking. Now that she's equipped the DPS dagger, I was looking into possibly a heirloom offhand. There are 3 available (+int tome and 2 shields) if you have the 220
Post a Comment
Read more 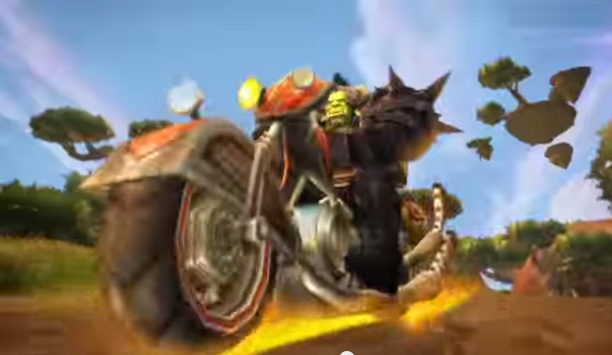 Racing through Nagrand! Yesterday, we announced the Azeroth Choppers head-to-head match-up between the Horde and Alliance, and we’re very excited to share the upcoming episodes and final bike creations with you. We saw a few questions following the announcement and wanted to take a moment to clarify things. First, we want to make it clear that players globally will be able to vote for their favorite faction bike—either Alliance or Horde. Second, the bike that receives the most votes will then be made into a faction-specific-only mount and be available FREE to all players (usable when playing characters of the winning faction, of course). Your vote will be very important and could just be the one that lands your favorite faction a shiny new mount. If you haven’t watched the trailer yet, check it out here and stay tuned to  Azerothchoppers.com  for more details! ( REF ) HORDE, WE NEED TO VOTE FOR OUR CHOPPER!! You going to stand for this #TeamAlliance ? #AzerothChoppers RT @
2 comments
Read more 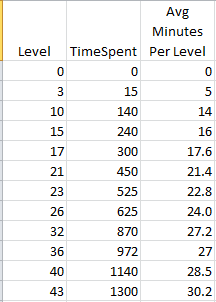 Taking a page from Cynwise , I thought it would be interesting to do some basic analysis of my leveling so far of my Druid alt. Considerations : I am leveling her using all pieces of heirloom gear available (except for the ring). All +xp, in addition to two trinkets for +health regen. I am leveling as a tank, so it means instant queue times for all random dungeons. I do not play every day, more like every other day, so I have a fair amount of rested bonus to burn between play sessions.    I found it really interesting that for the most part, I am averaging a level every 30 minutes. Dungeons like Gnomregan, it seemed like 2 levels a run due to the amount of trash, last night it was only 1 level in Uldaman due to the amount of running back and forth to the quest givers. It appears, based on casual observation, that the average time to finish a level, increases by a few minutes each 5 levels. Most likely due to the amount of XP required to reach the next level,
Post a Comment
Read more

Reading the April Fools Patch 6.0 release note s were funny, In addition to a Proving Grounds medal of Silver or better being required to queue for Warlords of Draenor Heroic dungeons, a medal of Gold or better is now required to post in the forums. but the real patch notes are just as fun and entertaining, even rather interesting.  Stat Squish! Your spells will still do the same percent of damage, just the numbers will be 93% less. OK, I could see this coming an expansion ago. Look at my druid, she's approximately level 40 and is in iLevel 40 gear and has 3000 health. My max level warlock is in iLevel 530 cloth gear and has 550k health. That growth rate is not healthy.  Before and After Squish The changes to healing specs is going to make for quite a bit different game play. No longer just spam heals, but 'try to make more tactical decisions'. Using AOE heals will not be recommended (costing more mana or doing less heals)..  Removal of Hit / Expertis
Post a Comment
Read more

Blizzard finally realized that most young, male players hate playing casters because robes, really do, look like long dresses . They now have plans to alleviate the issue. In the next patch, players will no longer have to transmog their chest pieces. Instead, they will be given the option when equipping it to either select a tunic or robe options. The tunic models will be similar to the full robe, but cutting off a the belt. This will lead to less male casters saying....   Further WoW News: WowHead Patch 5.4.8 Blizzard - new game - Blizzard Outcasts Blizzard - Female Draenei Model Amijade - Flying Warlock mount GameInformer
Post a Comment
Read more
More posts