Showing posts from December, 2014
Show all

Kotaku links to Bellular's Guide to Gold In WoD

Kotaku highlighted a video recently linked to a video by Bellular Gaming that highlights his 'easy' method for making gold; soloing classic raids.   He solo'd 3 Cata raids using a 600+ geared hunter. Bastion of Twilight, Blackwing Decent, and Firelands. He mentions also DE'ing a lot of the items then selling that on the AH, but didn't get into that for the video. BOT: 19 minutes BWD: 15 minutes Firelands: 30 minutes I'd be curious about running BOT as a warlock. With void-tank, it should be fairly do-able. The raid is not too far from the portal spawn point and I've actually seen most of this raid already first hand. If truely 20 minutes per run, I could finally start upgrading those garrison buildings to level 3! Yeah!
Post a Comment
Read more

Over the weekend, I finally completed both the Molten Core LFR and the Southshore PVP . With good timing, both of these went rather easy. Not Elkagorasa This was actually my first run of Molten Core , so I was actually quite surprised on the number of bosses in this raid. Yes, I am also not very familiar with running a full raid, but only the divvied up 4-boss portions in LFR. The full run took approximately 3 hours to complete. We had about 7 wipes in all, and mostly on trash. Unlike regular LFR, there was no spawning at the last major boss, but all the way at the front entrance.. sigh (am I spoiled or what??). I now have a fiery new helm and fancy new mount. Southshore is all about the group. The only objective is to get more honorable kills than the other faction. 300 or best of 20 minutes(?). We started off strong and never let the Alliance take over. Positioning just a little south of the tower mid-way, we managed to maintain about a 100 kill lead and ran out the timer b
Post a Comment
Read more

- December 24, 2014
Sitting here in the office, watching the "Looking for Group" documentary on Youtube. I think it's funny with the background of the Gates of AQ  (24m17s) comments then compare the results of what I think happened with the Draenor release...
Post a Comment
Read more 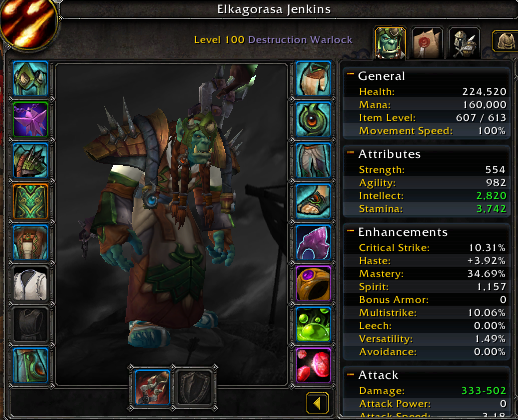 Elkagorasa has reached a point in his gearing, that I think Heroics are in order. I've ran a number of normal dungeons and gotten a number of gear items. According to the armory, he's at a 607 gear score equipped with 613 looted (or in bags). The proving grounds, introduced back in MoP, are a series of 8 fights in increasing difficulty that are supposed to test your raid worthiness. The start with basic single target fights (do you know the class rotation) in bronze, with multi-target aoe fights and cc requirements (stop the healer!) in silver. Basically DPS down all illusionary npcs, before the timer runs out. In Warlords they were implemented as a bar to pass before entrance. Heroic Garrison Quest. The Tavern in my garrison is only adding to the frustration with all the heroic quests that keep popping up. "Go get this item from UBRS" but it forgets to tell you that it only shows on Heroic. (Note skull in quest log for heroic dungeons quests). My frustrati
Post a Comment
Read more

- December 01, 2014
3 weeks into the expansion. I've reached 100 on Elkagorasa. He's now working to gear up for raids. I have managed to reach 604 by running dungeons and a little bit of questing in Nagrand. At the moment, he's gone through a 2 of the level 100 dungeons, Everbloom and Shadowmoon Burial Grounds . Both of these dungeons had bosses that required a bit of team-work. Everbloom's last boss, Witherbark , spawns a lot of adds. If they are not managed correctly (via the local mages) your tank can quickly be overwhelmed. This means as ranged DPS, I am running around and trampling flower heads and AOE the little flower pets that spawn. The tank is making sure that the mage attacks hit all of the other adds. We went through 4 tanks before one had his part mastered and we completed the dungeon. For Shadowmoon Burial Grounds, the very first boss was our crux,  Sadana Bloodfury . Our biggest issue was Dark Communion . If the boss consumes the spirit, they are healed and do more damage
2 comments
Read more
More posts