Showing posts from August, 2014
Show all

Warlords of Draenor, the Backstory

- August 29, 2014
During the big announcement on August 14th, Blizzard provided us a glimpse into the background of one of the Warlords, Kargath and how he came to lead the Shattered Hand clan. Last week (8/21), Blizzard posted a great short story by Robert Brooks, Hellscream. This short story starts off a few days after the events of War Crimes. Kairozdormu had advised him to expect a few strange discoveries. I've spent my life studying the timeways. If you try to count and compare blades of grass, you'll drive yourself mad, he had said . My plans require a few… favorable conditions, and we'll find them here. This is the perfect timeway for us. Not a perfect mirror image, but perfect nonetheless. Read the full story online  here , or download the PDF . I found the story shed light on a few items. I think you'll really enjoy getting some further insight into some of what is going on in before we show up in Draenor.
Post a Comment
Read more

Why NOT Grommash? (as end boss of Warlords)

During Blizzcon 2013 and a few weeks ago, Tom Chilton has let us know that the 'end-boss' of Warlords is going to be Grommash Hellscream. This caused a bit of outrage as people also heard "not another Orc" as the end-boss. Some are translating this to "not just any orc" or "not just an (single) orc" to justify Grommash as the end-boss. If you look at the story leading up to where we are now, Grommash actually makes sense. In our timeline (with spoilers from War Crimes ): Grommash , father of Garrosh, kills Manroth and finally ends the Orc's (self inflicted) demon blood infection. Garrosh, "saved" by Thrall in Nagrand comes back to Orgrimmar to see what his father helped build. Garrosh  is recruited as a military leader during the fight against the Lich King. He comes home to a hero's welcome and takes over as Warchief Pro Tempore while Thrall helps elementals. Deathwing happens. Garrosh goes a little power crazy
Post a Comment
Read more

Over the weekend the Robin Williams memorial character came up on Twitter. Personally, I think their revealed model is a bit Uldum , but maybe he can make a special appearance somewhere else in the game. From the conversation, it came up that this NPC should have something to share from his immense filmography . Blizzard is said to have chosen a genie NPC in remembrance to #RobinWilliams and the way Azeroth will honor him. #Warcraft #gaming — The Decoy (@IllidanDecoy) August 24, 2014 Me, spinner of tangled webs, thought at first that that this Genie, should pass out a nice flying carpet mount. Having only a single tailor, I thought it would be awesome if this was a non-tailor specific mount. They already have the model, but could color this one differently than the 2 already in game. Sadly, I didn't think this would happen. As with the last celebrity in-game character ( Mr. T and his mohawk grenade ) it was a short-term item. I felt if Blizzard added this mount it w
Post a Comment
Read more

In the 8 something years playing Warcraft, this is my first Legendary . The single reason why this was possible is the LFR. Without the LFR, I wouldn't been able to get into enough raids to gather the stones, secrets and runestones to complete the quest chain. Last weekend , I had 11 of the 12 necessary Titan Runestones. With this, I only queued up for Halls of Flesh-Shaping  and luckily I got my last stone from the first boss (Durumu). Lei Shen was easy as usual. Quick three bosses and back to talk to Wrathion. Purple i600 cape is now on my back. Challenge of the Celestials. Ugh. Not easy, but not the green fire PITA. I was able to finally win the fight after about 7 tries. In this you have to fight Wrathion. Void walker as my tank, all buffed up, ring the gong (like in proving grounds) and get yourself ready. He has some attack that the VW soaked up for me. The one item that I had to avoid was the lava pools that he'd spawn. If I pulled them off my VW, the pools would ch
1 comment
Read more

Based on this interview at GamesCom, it appears that Blizzard may be excited about bringing 5-man dungeons coming back a bit more. With MoP, I personally was disappointed that the scenarios tended to be more useful (while at max level) than dungeons . It sounds like the focus will be moved back to dungeons (regular, heroic, timewalker dungeons (aka downscaled older TBC dungeons)). Personally, I loved the dungeon experience in Wrath. You'd level up a little bit, then end the zone with a quest to run a dungeon. In Wrath this was hard because you had to spam chat to gather people for the dungeon. Remember, no Random Dungeon Finder back then. Looking at some of the beta videos, it looks like that is what's going on. For example: What do you think? Are you going to miss the quick scenarios?
Post a Comment
Read more

- August 14, 2014
If you missed the big reveal today at 9:30 PDT. First we got to see the new animated backstory for one of the Warlords. (Definitely not a fluffy, goody-goody panda backstory) Then they shown us something akin to the Blizzcon announcement. Finally ending 40 minutes later with the cinematic (where's Garrosh's influence?) Like with the Blizzcon Virtual Ticket, I missed the first 3-4 minutes of the announcement. A couple browser refreshes and it leveled out.
Post a Comment
Read more

The Quest for Green Fire Continues 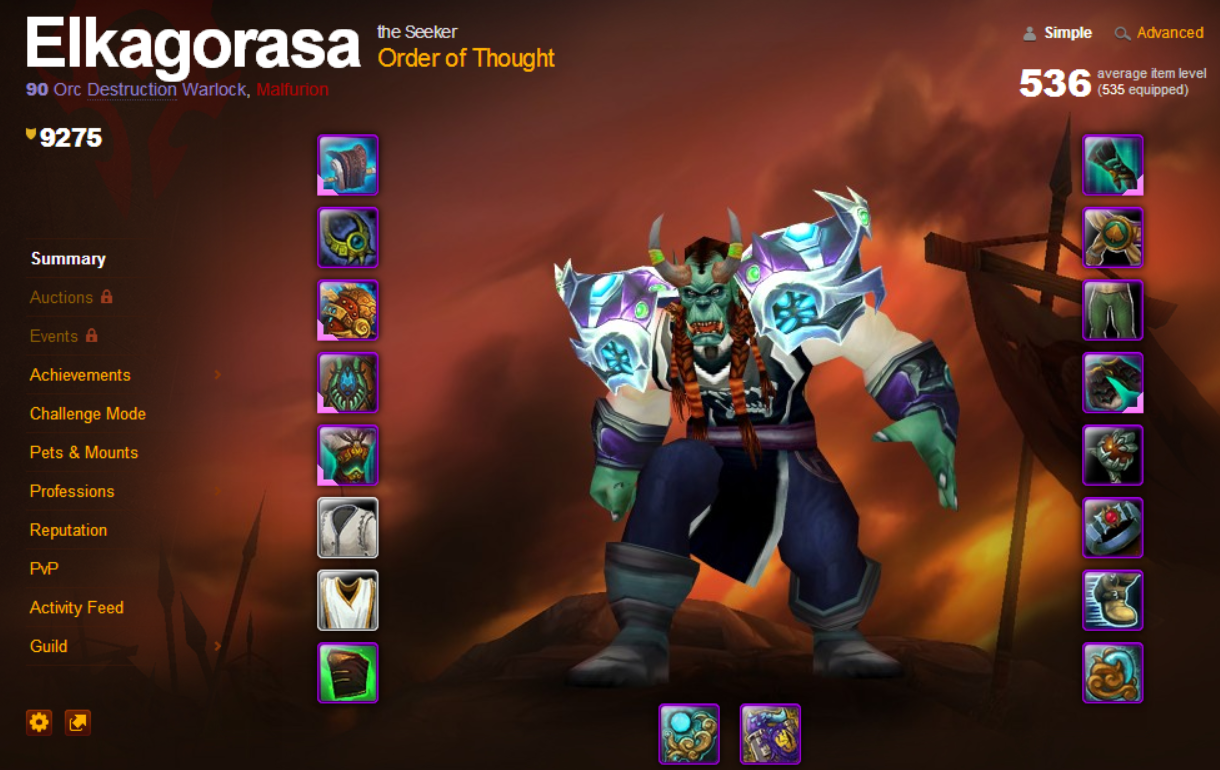 This morning I decided to give the Green Fire quest line another try. I believe I was approximiately i505 last time I attempted, today Elk is sporting a 535 level gear. This time was completely different. Elk was able to burn through the giant baby head in no time at all. Howl of Fear on the Lost Souls. Gateway across center to give a second avoidance of them. One interrupt of the AOE, but mostly just stayed far back. Soul Leech provided all the healing for the fight. One healthstone in my pocket, just in case.. What I hadn't considered was what came next . The scenario continues up until you fight the big boss  Kanrethad Ebonlocke . I had watched a few of the strat videos, and read some strategies, but hadn't actually thought it would continue on.. Top it off, I didn't give myself enough time to research and complete the Ebonlocke fight. A few attempts, where I managed to die on his first chaos bolt, one time I had a soulstone and revived from it, to die from a swarm
Post a Comment
Read more

I have been enjoying the CarBot WoWCraft cartoons! This 3-part series actually made me laugh out loud.
Post a Comment
Read more
More posts