Why not. I miss the old topic of the week. Topic 19 is to break down how you picked the names of your characters. I don't have that many, so, I am going to cheat a little here.. 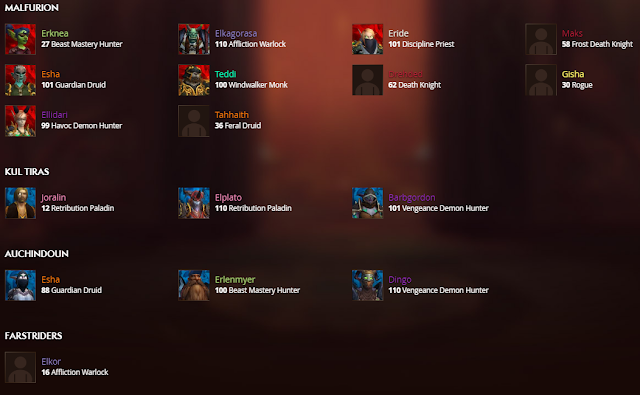 I have basically 2 naming processes, either:


They 'starts with E'

Elkagorasa - "Elk-A-Gore-Asa" Name that stuck with all these years. Here's how..
Eride - "Arrid-ay" After realizing that most raid/dungeon chat didn't something long to type "elka, um, elk, uh, e.." I opted for something really short for my third character, plus it pulls directly from my RL name.
Esha - Even shorter than Eride. Liked the name for a troll druid. Her alliance twin shares her name.
Erknea - "Ernie-ah" My cataclysm created goblin. I wanted something silly to go with a short-stature, "knee high" goblin. Ernie turned into Erknea.
Erlenmyer - alliance dwarf hunter - also misspelling of erlenmeyer (flask). All his hunter pets are science tools (scalpel, pipette, bunson).
Ellidari - "Elli-dari" -Is an obvious twist on Illidari. I thought having "Elli" as her name was fun.
ElPlato - "El Plato" - Influenced with my daughter taking spanish 1 in high school last year, so I while reviewing vocabulary with her. El plato is spanish for the plate or dish, because as a paladin she's wearing plate armor, obviously.
Elkor - wanted to chat with a character on Farstriders. Created a baby Elkagorasa twin on that realm.


The exceptions to the E rule are: