- April 07, 2016
Like many, Spring fever has struck. You're at this time bidding time in Warlords, playing Warcraft Alpha, in the Overwatch Beta, or playing something else completely. Sadly, I haven't been invited to the Alpha or Beta, so that's out. My Alliance character has gone stagnant as the arena team has taken an informal break. So, what am I doing?

Well, the Hearthstone hero this tempted me to play one of my low level toons. I took my bank-toon (goblin hunter) and decked her out in a full hunter set. I then proceeded to level her up from 5 to 22. Easy. I was done in a couple hours. Totally played on her is 22hours, but she's my primary bank toon, so it's over inflated.

Hearthstone. With the possibility of a new hero, I started playing Hearthstone as well. I had previously built the "Trump Mage Deck" (which I now can't find because it's that old. I am having a lot of fun with this deck. With it I've managed to play casual ranked play and win up to rank 22 (yeah about 7 games) before I moved on. (I still haven't found the new hero??)


The Division. Co-workers enticed me into co-op play of The Division. I've started focusing on the Engineer build. This means that I specialize in setting up protective cover and also can throw out a gun turret. The cover helps us hide from the bad guys, and the turret is like a little imp, just firing out dps.

Division is interesting in that several clothing slots have a matching vanity slot. This outfit (pants, jacket, and hat) is based off vanity pickups from the game. These items don't appear to take up gear slots. They are interchangeable at any time throughout game play.

In addition, there is a deconstruct method. I mentioned something like this in my warcraft wishlist. While I can sell any piece back to a vendor, I can also tear it down for raw materials. At night, after everyone's logging off, I'll go back through my bags and mark items that I don't want. 'That old level 6 pair of knee pads and that level 9 shotgun" Then from the game menu, I hold down the 'deconstruct' option and ta-da, I have 3 pieces of fabric, gun parts and maybe some new tools. If I want, I can go over to the crafting table and create a piece of armor, or new gun that I desperately need.

Finally, I've gone back to leveling my monk. Teddi, never made it out of the panda starting area, so he needed a little work. During early Panderia, we had the annoying issue of having to mail heirloom gear to our alts. The starting area is lacking in mailboxes, so you have to level 'the old fashioned way'. Ugh. Happily now, I was able to simply 'create' all 9 pieces of heirloom gear from the menu. This meant that I was actually over-level on most of the end-game content (with no good way to skip it)!! A CATASTROPHE, RIGHT?! 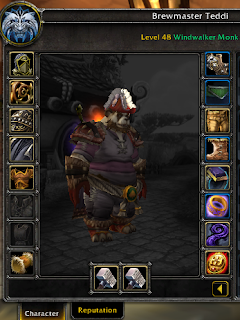 What I hadn't realized, is that at level 20, you learn a new spell called "Zen Pilgrimage". This ports you to a training facility in Panderia. Here you can do a simple (especially when using heirloom gear), fight against a 'teacher'. After you complete this quest, you pickup a buff, Enlightenment. This grants ANOTHER 50% XP bonus on top of the heirloom gear (+50% xp). Teddi is using the same gear set as my druid did, but with the addition of the heirloom necklace, strength ring, and the void tendrils. For those slow on math, this means 100% bonus XP while the 1-2 hour buff is active. With a level appropriate dungeon and fast group, I can level 2 times in a single dungeon.


Yeah, 645 minutes total played to get from 5 to 48. My longest wait is usually for the DPS queue.. If I was brave, I'll queue Monk Tank and see how much quicker it will go. On the other hand, dual-wield hammers!!


At 85, you can also include shoulder and leg enchants from Panda.
monk