Too much good stuff

About a month ago, my co-worker mentioned he wanted to try the Karazhan dungeon. He and his wife hadn't played since reaching 100 in Warlords. Of course, Karazhan is going to be Mythic only (WHY??) so to play you have a few requirements..
What does this mean?

Alliance, because we have two additional co-workers that want to start running mythic dungeons. They are both alliance on a PVP server (remember my Hunter?) and already geared rather decently in PVP gear. So in order to bring them along, we all needed to play alliance. Easy enough, Requirement 2, we play on a PVE server. Not as easy, but still not impossible.

We have 6 players (two married couples (1&2, 3&4) and one other, plus me).
We found Rys was guild master of an existing, and level 25, alliance guild already. She'd been playing with their son and had a max level (100) warlock. Viral, O-really-ya and El Plato were created new.

Little over a month (and $60) later, I now have a max level Draenei paladin on Kul Tiras. I boosted from approximately 36, as I was tired of running dungeons and wanted to get a hop on questing. I've managed to get 2 of the titan pilars (Azsuna and Val'shara), still working on Stormheim and Highmountain. I've done enough questing in Suramar to open the first flight path. I was happy that at 110, I could immediately turn in Kadghar's quest and start running world quests. I complete at least one faction's WQ set each week. I don't think I see all of them though. As I haven't opened up all the zones, my world quests seem to only appear in 'known' areas.

In the last week, we've started running heroic dungeons together. Possibly start looking into normal raid if we can pug the last few spots.. To help, I've linked to all the TL;DR videos posted by WoWAholics 101.

Meanwhile over on the Horde side 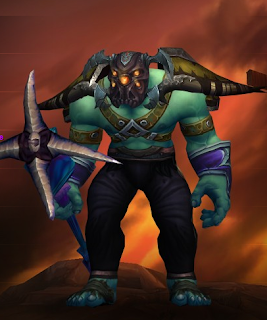 Elkagorasa has been doing nicely on gear acquisition. He's ran a few LFR, and picked up some gear. He's sporting 840-844 gear. He keeps getting this helm model, so I am having fun with the rest of the outfit. This week, it's the Bug-gladiator?

On my way to Pathfinder, I am revered with 1, honored with the other 4, and working on Nightfallen (but can't see it via armory page here at work. Looks like Valajar are not showing either.). Looking at the rewards on WowHead, Valajar, I am at least Honored as I have purchased the boat (which I thought was a toy, but it's on-use).  Loremaster with all but Suramar and just need to locate the alliance flight stops in Stormheim (Greywatch, Shield's Rest and Weeping Bluffs). All rather easy to complete with just a little PVP world quest..