- May 08, 2015
Tonight, I plan to start working on my Netherwing reputation. This is the faction, that sits way out in old Shadowmoon Valley, under Black Temple.

Where to start?
As of this moment, I am HATED with a capital H by this faction. Checking WowHead is awesome. I points out that the last quest that I completed in the Introduction chain is Karynaku. Two more quests and I'll become an 'Ally of the Netherwing'. This final quest provides (without buffs) 42,000 rep! 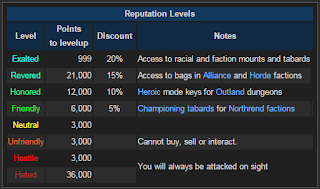 And then...
I can start the quests. Neutral one timers and daily quests reward 250 each. (Sure 20% of 250 is only 12.5 more rep, but it helps! Every 20 quests will give me one entire bonus quest.) Friendly quests give 350 and Honored give 500 rep each. If my prediction holds, I should be (at least) Honored on my first day of quests. If I find a bunch of eggs (250 rep each), I could potentially go further..

So, here it goes...
Update 5-11-2015: Disappointingly, I was reminded of the loss of Mr. Popularity as a guild perk (with patch 6.0.2). My first quest turn in returned only the 46,200 faction rep. Am I being greedy? Maybe, but I miss this bump. After finishing all of the intro quests, and spending way too long running around the mine, I finished out the first day where I hoped to be with Mr. Popularity bonus. I only saw two eggs the entire night. One for the quest and one dropped off trash.

Day 2 (5-14-2015): Ran through the dailies (this time without DMF buff) again and popped up to Honored with Netherwing. I started doing each of the 'race' quests. Found out the second contestant and on cheat. Throwing out their void portals, fire, and the last guy, electricity. I've completed all but the Mulverick fight so far. I thought he was going in for a landing, but instead took another turn and I failed. At this point, I fly really fast, so keeping up with him isn't a concern. Get hit by his shock isn't a concern, I can easily catch back up. The problem is missing a turn (like the docks).  I have yet to fly to Twisting Nether or Nagrand for those quests. Since my main hearth is set to pandaria, I thought I'd hearth home, grab portal to Shattrath, then grab taxi to these stops, that should be 15 minutes, so I could hearth back again.. :)

Day 3: After completing the last of the races, it actually bumped up a nice bit of rep. Winning the final race not only provides 1000 rep, an achievement and a trinket providing riding speed increase (only usable below level 70). Funny enough, the last race against Skyshatter was the easiest. 1) He wasn't obnoxious on his racing, so you could easily follow him. 2) His spell seldom did a stun or pushback. Most of the time his fireballs "missed" completely. I took a taxi over to Twisting Nether and Nagrand for the two side quests. This opened up another daily (booterang!) for me,

which I completed immediately. Surprised by the amount of competition still out there for these orcs. I have only picked up a single additional egg (spotted it during a race and came back for it).

Day 4 to Completion: The entire process took about 2 weeks. Start day port into Shattrath, fly to Nagrand for daily to kill the 20 shadow orcs. Grab taxi and fly to Skryer's outpost in Shadowmoon, rain-of-fire the invading forces, then complete the quests for Netherwing. Received about 2500 rep daily with no % bonuses. Found one book quest item, that I turned in for 500 rep, included a side quest to interrogate a worker.
Found macro for the booterang quest that made it easier. Spammed that as I flew around. Found most of the disgruntled orcs were sitting right near the main camp.

Finding eggs was rare. The entire time, I found a total of 6 eggs. There is usually 3-4 other people working on rep for this faction every day I was out there. My best day, I found 2 eggs sitting right out in the open.. WOW OMG GRAB 'EM!

I also found that instead of farming the docks for the relic hunting, that the drakes took off from Dragonmaw Fortress. So I'd farm netherskates for the fel gland, then land on the ledge outside the fortress. They tend to take off in 2s and 3s, so you'll need some instant cast damage, mixed in with some short damage spells.