- April 30, 2012
Ok, it's almost midnight local on a Saturday night and I've finally been able to logon to the Beta. They've added a new 'create template' option, which means no more copying from the Battle.net page, yeah! Now I officially have a level 85 warlock in MoP beta.

As Poneria mentioned the spellbook is different. They've combined all of the spells I could use as a Demonolgy lock onto a single tab. This includes demo spells (metamorphasis, hand of guldan) with talent spells (shadowfury) and even the demon spells (Imp:Flee). They are listed as active or passive spells.

Good? Sure, as I re-learn to play my warlock, I can focus on only those spells that I am familiar with. If it doesn't show on my tab, I can't play it.

Bad? Does this mean my demo lock no longer can cast Immolate? Yep! Sure does. The in-game spell helper says "these tabs show spells you would have if you chosen a different spec."

Hand of Gul'dan is instant cast (sort of) and it follows the target around (not a circle the tank drags the mob out of). This is really nice, because I can target a single mob in a crowd and it will encompass all of them in the crowd. Note the 2 at the bottom of button #3 (new Hand icon). 2 charges, then it goes into a cooldown.

I didn't get my loot monkey, but when I am looting these monkeys, I am looting all the corpses in the immediate vicinity that I killed. 1 body, 20 silver, 2 bodies 40 silver, etc... It's AWESOME! As long as I stay within, say, 20 yards of all the bodies, I can loot them all at once. 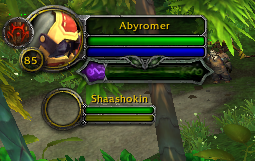 Metamorphosis is a stance, not a spell. Metamorphosis uses a new warlock resource called "Demonic Fury". You build fury as you fight mobs. (Fel Flame generates 15 Demonic Fury. Corruption - 6 with each tick) As a resource, I can use it to transform back and forth into demo mode. Flipping back and forth is definitely an option, using a bit of your fury each time you do. Keep your Fury high enough, you can stay in demo form quite some time. :) I managed about 45 seconds without trying. Since you can't fire off corruption from demo form, you need to flop back and forth to get the nice dot effect.

The demo talent Wild Imps easily spawns 4 more imps for you, just by casting shadow bolt. When transformed, shadow bolt converts to Demonic Slash, a frontal attack that does 6 million damage? ~20 seconds out of combat, all my fury drained away. Otherwise, well placed attacks, I could keep going.

Yeah, did you notice it?? Demonology doesn't have any shard management!?! None. I can't even soul harvest, it's a passive spell on my pet talent tab. "You and your pet regen health at 2% while out of combat." In Cata, that was my pre/post fight spell, regen shards, heal up. Drain Life now (10 fury per second)?? :)

Overall changes. Spell rotation is only a few keys and not a range of them. (curse), Hand of Gul'dan, Corruption,  Fel Flame, Shadow Bolt, Soul Fire, plus those you pick up from your talent tree. No Immolate, No Incinerate on my toolbar. The first 5 spells on the toolbar are all instant cast. Shadow bolt has a 2.5 second cast time. I put Meta on my #1, because I found I was bopping in and out of meta as needed. Too many mobs? Pop meta and several of those change into meta talents:

Many of the items that Cynwise brought up about locks in Cata, may be gone in Pandas. Playstyle is easier for beginners, but has a high level of complexity for the long time players. Gone are the clunky mechanics around soul shards and soul burn, replaced with an energy bar that requires the player to be actively attacking. The simplified talent tree is no longer a 'build' question, but simply to provide access to a different set of spells. PVP? Maybe you want ShadowFury for the stun or Howl of Terror for the AOE Fear. It's no longer a spec (destro vs affliction), but a simple click away. I thought this was a fun way to play. Flipping back and forth, I can manage 3-4 mobs attacking me. I feel like I am doing real damage as I watch other classes play through. In fact, I am still up and it's after 2am. Ugh!