Late last year, my daughter asked for one of the "stress relieving" coloring books. They were all the rage locally, sold everywhere including the grocery store. (Retailers, take note, if you sell coloring BOOKS, this is a great up-sell opportunity to also sell coloring PENS/MARKERS/PENCILS!!) I had fun coloring in her book, so decided to get one for myself. Sadly over the holidays, I could not find markers anywhere until late-January and didn't want to commandeer her glorious 100 color gel pen set.. 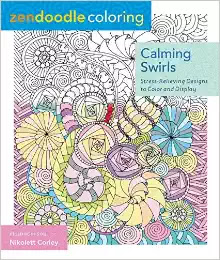 With that, I finally purchased my own ZenDoodle Calming Swirls coloring book. Lots of intricate little dots, swirls, swooshes and patterns to color in. So far, I've colored about half of one page. It was then, that I realized that my color-blindness could be making this awesome pattern rather bland or ugly? "Oh that looks 'nice'"

One side effect of having a giant box of markers and paper on my desk is that I started doodling. "It's a lunch activity Mr. Boss". (he plays phone games, so it's ok).

This week, an inspiration hit me. I've been working on a this short 8-panel comic script. I'll post one entry every few days.