- February 25, 2011
Reading through comments on Killing 'em Softly on reforging, someone suggested using the AskMrRobot.com. After reviewing this site, I am really excited about it. 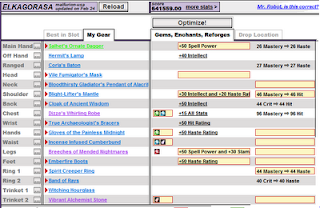 Why do I want to Ask Mr Robot?
First blush, Mr Robot provides you a breakdown of your current gear, what gems and enchants each item has and if you've reforged it. At the top, you get an overall gear score for this build. My first impression was Wow-Heroes, without the "you could be running" information or MaxDPS with more functionality.

Now looking a little closer. In your gear column, note those red arrows. These are items that you could still upgrade (based on the filter at bottom you selected). For example, if I select the filter to NOT include Darkmoon Cards, the Witching Hourglass turns into the BIS pre-raiding trinket. There are 6 different filter options (rep, money, archaeology, darkmoon cards, BOE World drops and random drops) and 3 levels of gear (pre-raid, raiding and raiding heroics). According to Mr Robot's dev team, the BIS slot is determined by SimCraft results:


Mr. Robot noticed that SimulationCraft is very popular amongst warlock theorycrafters, so he used it to generate his weights. But SimC is in beta, so these will need regular updates.

If you don't like the stat weights, check out the Stat weight editor. It's very basic, but I really like this. Not only can you set a weight, but you can set a (soft) cap for some stats (i.e. Haste for locks). Right now looking at Mr Robot's suggestions for my current gear, the site suggests reforging almost everything for hit. When I reach 17% hit, the prioritization will switch heavier to Haste, automagically. Tweaking the stat weights even does a number of the gear selection. I ramped up Crit to 100% and my offhand immediately changed from +hit +haste gear to +hit +crit gear.

Once you find BIS gear that's personally achievable, select the "Drop Locations" tab and now you'll be presented with how and where to get it. This is wonderful when you combine this with the weighted table available under the [...] button. Now I can see how much better that World Drop is than the Exalted item is. I'd definitely consider buying the rep item at a 9 point loss personally (over a best possible 0.1% drop rate).


Suggestions:
As a gear site, there isn't features that I openly hated. My comments about the site are more improvement suggestions.
Overall, I see a definite use and benefit from this site. I confirmed that I need to keep running the Ramkahen tabard to get the exalted boots. I see I shouldn't have bought the Justice belt, but sent the mats for the crafted one. Instead, I would have purchased the Justice neck.

Last night, before logging out, I blindly followed some of the suggestions under "Optimize" and watched my spell power go from 5400 to 5800. Yes, part of it was the cata spellthread enchant on my pants (vs the high-end wrath) because the price really dropped. Part of it was the boots that dropped in SFK the other night. I also replaced my i318 dagger (and JP offhand) to the Very Manly staff (from CoC). I'll let you know if this in turn means higher DPS.
gear interest Over1500 tabards