- January 14, 2019
This project started as something silly going through my brain then took a life of its own. Here I'd like to detail several mythic+ dungeon affixes that never made it into the game. I now find myself trying to think of ways to deal with each of these affixes. 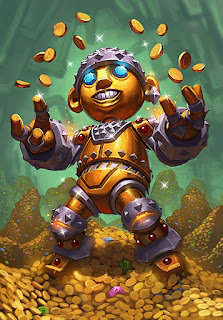 Shiny - Random mobs will be afflicted by BLING. These mobs will be sporting extra gems and polish on their armor. Players will be able to identify them via a glowing aura and small sparkles that randomly twinkle around them. While fighting these glowing and twinkling mobs, players will randomly get blinded for one second. 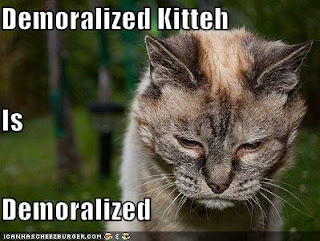 Demoralized - While fighting mobs, they will randomly become completely demoralized and simply sit down. Once demoralized, these mobs will become unattackable. They will sit on the floor until they encounter another mob that is actively fighting you. Players may find that they are short numbers to complete the mythic+ dungeon and will want to kite trash mobs over demoralized mobs. 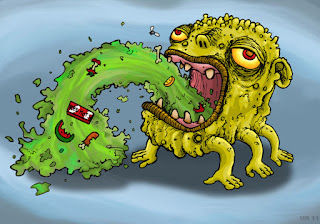 Vomitous - Upon taking a critical hit, mobs will have a 15% chance to vomit on players within melee range. This vomit will leave a pool of green, viscous vomit on the floor. Players hit with vomitous will get a [hideous smell] debuff and will cause more mobs to vomit around them. If a player steps in a vomit pool, they will slip, get a 2-second stun and also get the hideous smell debuff. Players can wash off debuff (water element in the dungeon) or wait for it to fade in 45 seconds. 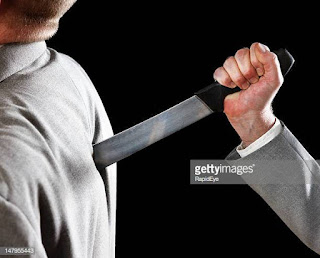 Disloyal - Randomly mobs will become disloyal to their cause and start fighting with your party (instead of against). If the flipped mob is the 'leader', his entire group will start following your party. Disloyal mobs have a higher chance to aggro any party nearby, causing a [Prove the Faith] buff on these aggro'd mobs. The number of disloyal mobs following the party will increase the chance to 'encourage' more mobs to flip sides. Disloyal mobs are not attackable while loyal to the player and will not count towards the count.

Overly Optimistic - The player's party aggro radius is increased dramatically, so mobs will engage when they see fighting nearby. Mobs that are overly optimistic will also start out with an enraged buff for the first 30 seconds, then slowly burn out if the fight goes on long.


Swifty - Mobs will use advanced AI tricks learned from watching hours of PVP and twitch Fortnite streams to pull all the dirty tricks. The party will use coordinated attacks. They will pretend to dance with you, then get up and attack you from behind, they may even cluster into a single party blocking all the doors.


Day-Z - All non-boss mobs will randomly have a chance to come back to life as an undead scourge. The respawn timer is completely random. If a zombie walks over a corpse, it is highly likely to reanimate these additional corpses. The reanimated mobs will have 50% health and move at 70% normal speed. They will also have none of their original abilities. If they do any damage to a player, they will pass an 'infection' to that player. If the player dies before the debuff is cleansed, they too will come back as an enemy, undead scourge. During this affix, corpses will not despawn so players can see where previous kills are at. Fanboii - Upon entering a dungeon, a child fan will be attached to your party. This child is super excited to have finally caught up with your party and will follow you throughout the dungeon. While progressing through the dungeon, s/he will make comments and take pictures during the fights. (pictures will cause momentary blindness if facing child). Fanboii children will not aggro enemies during combat but have a higher chance of triggering any traps skipped. Children can also get distracted, and fall behind, running through areas the party just passed through. Having a cute pet out will help keep the child focused.