- July 10, 2018
I am STILL working on my protection paladin mage tower. I was actually really excited to hear that patch 8.0 did not drop today. No, it hasn't been super easy now that my weapon is overpowered. I am at roughly 70+ attempts, with 40 of those being in the last 3 days. I've read the guides, watched numerous videos, but I still can't seem to complete this challenge. (It would be my second completed)

At moment, I am running 946 item level and my artifact is overpowered to 136. I have the awesome Tyelca pants, but I don't have Sephuz's Secret like many guides suggest. This typically means that I have been not dying to health issues, but because of too many stacks of the aura (10 stacks hurt), flying off the platform or Velen not fighting off the horrors and dying. I've seen ~1% (i.e. 500k health on Kruul) ONCE! Your helper is released and does DPS the second phase and actually did 200k DPS after I died. Meaning, I was 300k health away from winning this challenge!! (*#&$ If I could have only hit the pally bubble before death. /sigh

I have progressed. My biggest improvements in gameplay have come from Darkmech's video. Now, the video itself is useful, but the biggest improvement came with his /focus macros. Yeah, stupid 'use this ability on /focus' type of macro.

My issues:
I've been keeping the frustration down, by only attempting this fight while using a defiled augment rune. When I run out, I stop for the night. I have been managing to acquire on average 12 runes one a toon each day. Now that I have one more week and my weapon is only getting stronger each day, this SHOULD get easier, right?? I'd really love to get the weak auras working. I may just delete all the auras I have already imported and try them again. Maybe the author put in character specific triggers? Maybe using spell names and not ids?

Update: 7/11/2018 - Gear drop caused a re-roll of all my stats. I took this opportunity to shuffle in more haste stacking gear. This increased my DPS rather considerably.  (For those that use AMR, I swapped to "AGGRESSIVE" from (dungeon friendly) "CONSERVATIVE")


I am now getting the bosses to transition faster. I also changed my legendary Breastplate of the Golden Val'kyr for the Pillars of Inmost Light. Pilar's has a nice buff to the artifact weapon's ability "Eye of Tyr". I've also created a macro to apply a [Potion of Prolonged Power] when casting [Eye of Tyr]. I attempted the run about 8 more times with this configuration and got to Kruul most of the times, but also got killed before completing the challenge. I got killed by being knocked off enough times, that I decided to have my engineer make a few (hundred) Goblin Gliders. Shall I bind to the glider to "Z"??

The last issue remaining, the Weak Aura's are still not working. I noticed that the weak aura is in German so all the spell abilities and the trigger of zone information was not English or using spell #s. I've updated the WA copy, but it's still failing. If I get them working, I'll post them here. :) 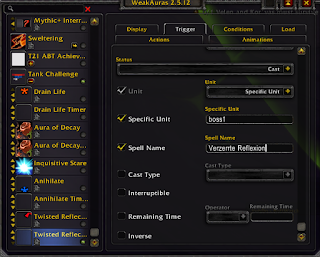 I got a number of the weak auras working. First was the [load] function on the group was tied to the zone name. Fixed that, then fix each aura by looking at the 'trigger' tab, searching up the spell, and replacing with the spell # (off WowHead) instead of the spell name. In many ways, using the Wowhead Prot Pally guide was easiest to find the exact spell (like drain life). This was most helpful with Aura of Decay. Seeing the stacks and then the stacks dropping was nice to maintain DPS.

And then this happened!

ONLY 107 times before I was successful and when I did, I hadn't realized he was that close! OMG so happy pic.twitter.com/N0DLGaqjQ0
— Casual Elkagorasa (@elkagorasa) July 13, 2018

Last night it finally happened! I had only one defiled rune left to go. By now I am consistently getting Variss down and progressing to phase 2. I am finding if I don't kite Kruul, he doesn't jump, so not as much green stuff on the ground. I have been kicked off at least 6 times by infernal stomp so I am starting to reliably side-stepping it when it comes down. My biggest surprise was when it was over. I hadn't even realized how close I was when Kruul was moved to the center and stunned.