With Hallow's Eve, I went back to my level 101 Discipline priest and started playing her again.


It was a bit selfish, but I saw that lower level toons could also participate in the Headless Horseman fights. I figured why not enjoy the instant queue of healing along with potential drop of the horseman's mount. (still no luck). At 105, I stopped leveling her to 110, and spun up a new character. 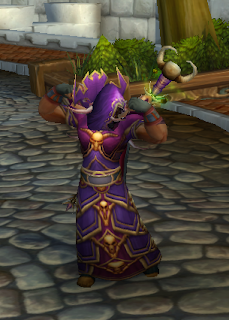 First try: Super Dude
Epedemi - Male HUMAN Priest. I have only played 2 male (max level) characters (warlock and hunter), and thought it would be fun to play a male draneii. Brother to ElPlato? He got to level 9 and I wasn't having fun. Something with the super hero image, I couldn't take.

Take 2: Go Small
Ehlo - Female Gnome. Back to a pink pigtails class, I thought it would be fun; sort of like watching my 4yo daughter run around the house. (not my video). So far, it doesn't disappoint.


Healing in the age of heirlooms.

Questing is too slow. I am standing level 1 in the gnome starting area of Gnomeregan. Shadoword: Pain the entire room and watch them drop before they run to me. I made it out of Gnomer at around level 3. Already higher level than most mobs. So I mount up and run over to Kharanos (2-5). It's Hallow's End so Headless is attacking. Did the daily quest here and 0 XP gained.

Kill a few dozen mobs in area, get up to level 4-5 and run over to next area, Qol'bolar Quarry, then Dun Morogh. On it goes on-on, I out-level mobs and decide to run all the way up to wetlands. At 10-12 I am fighting and killing mobs (fairly) successfully 6-8 levels higher than me. Nice chunk of XP but no quests available.

At 15, I start running dungeons. Here, as you can guess she grows even faster. One night of dungeons equals about 5-6 levels. Only slowed because we can't find a tank willing to run. I suspect that some of those DPS just need to try it out. It's really not that hard.. 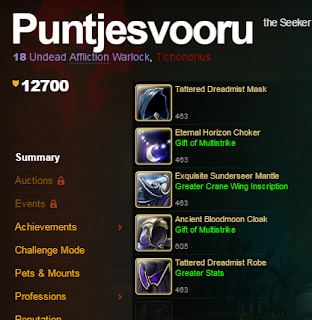 Around 30, my co-workers get interested and they found alts stalled around here. I now have a human rogue and night elf warrior running with me. The warrior is running DPS (fury?) so we still have to wait for a tank, but I am trying to convince him to run Prot spec so we can instant queue.

Still, we ran a handful of dungeons the other night and all leveled up. WHY DO PEOPLE SKIP MOBS? The tank we got was 'avoiding' large clusters of demons in Dire Maul?? Wait no. XP for killing stuff, not just the not-so awesome loot bag at the end. Soooo as a ranged dps-healer, I was pulling everything I could reach (and some I had to run to). Shadoword:pain now has a nice booming sound associated with it. boom, tab, boom, tab, boom, tab.. "oh did i do that??" /giggle

The last weekend, I figured it was time to invest in enchants. Sadly I couldn't remember what enchants to run??.. That's when I remembered this post from leveling my monk. By doing a little heirloom juggling, you can technically enchant any slot that has an enchant. Apply shoulder and leg enchants using a max-level toon, then mail back to your new toon.


It's an Enchanting Evening
So, what can we apply as enchants? According to Icy-Veins, our stat priority should be:

So, if we only enchant our heirloom items, those slots are:


The Mists of Pandaria (shoulder & leg) enchants require a level 85 - 90 toon to apply them. I tried to have my 110 toon apply the enchant, but it was blocked because the heirloom gear scaled up to her for ilevel. "Cannot be applied to 800 ilevel item". Luckily I had an alliance character at 88. Unfortunately she's on a different server, so I couldn't mail the enchants to her. I had to use the gold on-hand in order to buy the enchants locally. On Auchindoun-US, those two enchants would have cost her over 6000 gold; much more than she had on-hand. SO... I bought the lesser "Cerulean Spellthread" and applied that to the pants. Then had my bank toon buy the non-min-level Legion enchant "boon of scavenger" for her shoulders. She should at least pickup more cloth??

The best enchant of all? Earthen Vitality applied to the boots. Running dungeons with a speed increase is AWESOME!  I tested it around the fountain in Stormwind and found the speed increase quite liberating!

7.3.5
With the next major 'patch' of Warcraft, we're going to see Zone less experience for all non-max level zones. All Vanilla, BC+Wrath, MOP+Cataclysm... With this, it should open up a few items that I really look forward to.

Over on the forums over at MMO-Champion, they've weighed in that 7.3.5 probably won't drop until next year. Unfortunately by then, I hope to be raiding with Ehlo, but I guess if we all start leveling up new allied race toons, it will be supremely helpful.