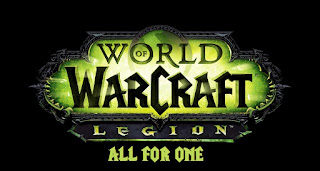 Now that we've finally taken down the Burning Legion in their home world (Legion patch 7.3). It's time to start working on taking care of some corrupted old gods. This isn't going to be easy, and we're going to have to work together.

(cut scene) Dalaran - current time - the teleporter pad in the center of Dalaran has been destroyed and players can no longer access their pillars. Here Khadgar calls all players together and announces the defeat of the Burning Legion (cheers). He now needs us to join together as one to purge the last of the corruption. The crowd starts chanting "ALL FOR ONE! ALL FOR ONE!" (fade to black) 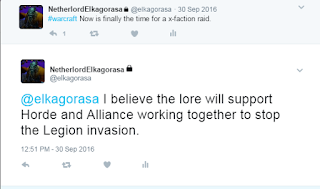 This patch will include interface changes throughout the game.

Neutral everything - We've already had all auction houses go neutral, with 7.4 we'll also see cities, flight masters and npcs convert to neutral. Horde, but you want your hearthstone set to Stormwind? That's OK! Best of all, you will be allowed to learn the same languages as the NPCs and be able to communicate across factions.

Horde, Alliance or Neutral? - No longer will Pandarian's need to choose a faction at the end of their quest chain. Instead they will simply be able to live their lives without taking sides. "Slow down" is the new mantra of all surfing pirate pandas..

In fact, there will no longer be a faction button on the character generator either. You will still start the questing in your 'race starting area' but once you reach 10, the taxi stand will allow you to fly to both horde and alliance cities. Want to have a sexy night elf, but like questing in Crossroads, no problem.

Questing - As in Legion, there will no longer be a zone order. This opens up the Machete Order of Warcraft. Follow the quest chain as Anduin grows up. Create a different chain that follows Khadgar around. Kill Garrosh in Nagrand, then follow his dead zombie body into battle in Northren. The quests, dungeons and raids in each area will drop gear appropriate for your current level.

Timewalking What? - LFG is about to get REALLY busy. Now that dungeons and raids no longer have levels, you can now queue for them anytime. You'll be able to pug groups for Vault of Wardens at 15 and The Stockades at 101. Oh, sorry no longer can you solo this legacy content. Ulduar is now a max level raid, every-time.

When? - You want to be at Blizzcon this year! You'll get to see the first dungeon runs where Tauren, Trolls, Draenei and Goblin are all working together to kill the yet unannounced end-boss. Grab your epic class mount and get ready, we're about to all go flying into battle!! If you haven't completed pathfinder by November, don't worry; most of the fighting will be done on other continents around Azeroth.

Is this the end of PVP? No, of course not. Even though we're all in the same family now, it has never stopped siblings from fighting. In fact, this will only help PVP even more. Do you happen to play on a server unbalanced one faction over the other? As of 7.4 all PVP will be grouped by BG
rating, not faction. Each team will split down the middle so average team ratings are similar. There is only one slight negative impact. There will be some adjustment (fight red, not just s), but in the long run, it will make the PVP game play a lot more satisfying for everyone.

Expansion 8 not far behind. With 8 we see the end of the story. Azeroth is safe.