The Importance of Being Human

- July 22, 2016
I've been having a long (140 characters at a time) conversation with Goldy (aka @BFSTINMG) about Blizzard's new "Silence System". This system will 'silence' users who abuse text chat in the game. If they get reported for spam or abuse multiple times, they will get an account wide silence penalty. This penalty will range from 24 hours for the first incidence, doubling for each additional incident. 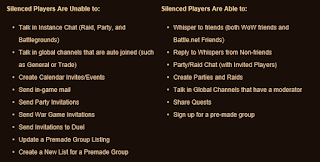 Goldy's comment on Twitter was why can't they automate this? This is way too complex of a system.


Seeing some tweets regarding the silence system, and wondering what are the majority of the situations this is trying to correct?
— Goldy in Legionland (@BkfstinMG) July 21, 2016

As a fairly avid PVP/LFR player, I can think of several times that people have become abusive. That random BG, where you have one player bashing everyone for their 'terrible DPS' or lack of healing, etc.. That dungeon late at night, where someone playing drunk or high and sitting there chatting about their nakedness. The LFR where we've died multiple times on the same boss and someone keeps DPSing when the boss is in berserk mode and someone is brutally calling them out on it.

Ok, a little background. I've been an email administrator for a number of fairly large companies. (Only large companies want a specialty email admin.) As an email administrator, I've been called in on more than one situation to enforce blocking of certain types of communication via email. This ranges from the basics of spam filtering and virus/malware blocking to capturing protected health information (PHI) that is leaving the system. I've come to learn that you can't enforce policy solely with technology.

One year I worked for a CEO who was extremely concerned about corporate image. He asked that we configure an email filtering policy that would prevent receiving and sending email containing swear words. Two members of the team created a 200+ long list of words that could be considered swear. Each word would combine into a total score. If it contained any violators the email would be blocked from delivery and someone would receive an alert about the incident. The problem with email correspondence is that we had customers. Sometimes they live in location that looks like a swear word. Sometimes, they have an unfortunate name that looks like a swear word. Unfortunately, we found out that the system we used to filter, pulled from anywhere in a word. This caused things like "Essex" to be captured. The filter was too op. We had to implement a a weighting system, where 0-5 words would not be captured and more than that was flagged and stopped.

From my about page, you'll know that I am dad of 3. In any adult's life, there comes a point when you are inclined to swear. Someone rear-ends your car while your waiting for the light. Waiter drops a piping hot cup of coffee on your lap! Over the last years, I've trained most swear words out of my vocabulary. Instead of something repeatable by little kids, I now use words like 'cupcake' and 'fudge-nutter'. (which actually makes it easier to swear more often. "Oh cupcake, I forgot my phone in the house!" Point being humans can easily replace spam/abuse words. A computer can be set to scan for specific keywords, but can you can't program meaning.

I am a casual player. I often get into random groups with people as they are about to break up for the night. This means the  players are already grumpy, and some swearing is happening due to "wipe 18 on so-and-so boss". More often than not, this chatting is over VoIP (Ventrilo, TeamSpeak, etc.). As people sit venting their frustrations, it's easy to join along with the f-bomb festival going on. Unfortunately, with kids either sitting in the other room, or even sleeping on the recliner next to me. I would be typing my complaints into raid-chat. If a system was setup that simply blocked me based on verbiage and not on context, I'd be in trouble. It requires human intervention. I needs someone with the entire story and not just what was said/typed. Sure, for some interactions, it's obvious, but due to the sheer number of subscribers, Blizzard would have not likely caught this user without their input.

WoW is awesome because of it's community. We don't need toxic players polluting the game. It only goes to scare away new subscribers and frustrate the existing ones. We can all /ignore them individually, but having a system like this where if they are reported enough, they may be forced to leave the game, even better. Most importantly it us, the community, doing the reporting. It's easy to contest a anonymous computer algorithm and say 'it don't understand', but it's completely different when 5-10 people are reporting an offense. You have witnesses. You have undeniable, irrefutable proof. When someone is giving you money for something, and you tell them GO AWAY, you better have darn good proof as to why.