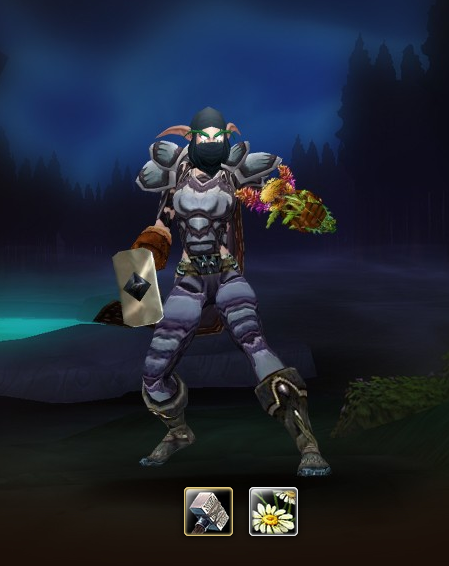 My Alliance druid is still working hard to reach level 90 before the expansion drops. The last few days played (real time elapsed since 6.0.2 dropped), Esha-Alliance has been questing and running Wrath dungeons. The questing has been interesting because of the difference between Alliance and Horde. Little nuance differences like their purpose for coming to Dragonblight. Save the humans, vs experiment on the humans!

As of yesterday, I've dropped carrying the iLevel 40 off-hand and decided to just carry a bouquet of flowers. The stein provided only a few stam, then int and spirit. The flowers. set off the ninja costume nicely against the main-hand weapon. Yes, it's silly, but so was equipping a weapon that was from the starting area of Vanilla. Ok, I really should have gotten the two-handed weapon for tanking! I know now!

DMF is almost over, but I've tried to maintain the Whee buff for the dungeons. I really should purchase a few of the DMF hats for when I pull more than the healer can keep up with. I am trying to learn all my damage mitigation techniques, and hopefully it helps. Trying to be less of a button masher, but druid tanking (so far) doesn't seem to be anything but that.

With all that's going on at home, aka IRL, I doubt I'll make it all the way to 90 before Wednesday. She seems too close to 90 to pay $60 for a boost to 90 at this time. I do see the value though. Leveling all the way to 90, vs, 60 with a boost, or even boosting from 0, I could have been running rated BGs, or raids with my co-workers a lot longer. Maybe even made some inroads into the legendary cloak before the 6.0 patch landed. My current target is 88. See 12 more levels and she should be able to start questing in new Draenor.