- February 27, 2013
Inspired by Cynwise, I decided to do a little math. Ok, no deep analysis, just some basic calculations on my gear. I want to know what it's going to take to get me into the next level raiding. 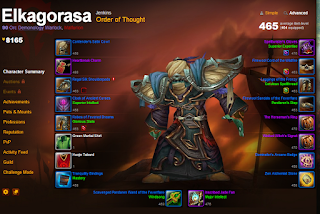 I have an average gear score of 465 equipped now. This is found by doing a simple average of my equipped gear. Fire up Excel, and fill in the numbers, easy to do.

The changes coming up in 5.2 look promising. (Next Tuesday?) Valor point rates drop, rep options increase, new scenarios and raid factions. I am hoping I'll be able to pickup the 522 neck piece from the raid faction without entering the raid (hopefully not like Firelands). Of course, all my valor will probably convert to justice, so technically not a net gain.