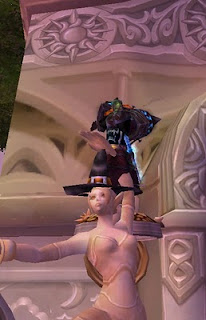 If you have a lower level alt, now is the time to start running them around Azeroth. Find yourself a friendly guildie with a 2-man rocket and start flying around to all those Inns. Grab the flight paths and (based on last year) a nice bit of XP. It's a quest, so wear your BOA gear (and guild tabards) to get an extra bonus.

This year, Blizzard (reference) has removed some of the randomness in getting the achievement, by making the Sinister pet a vendor item (instead of solely a random drop). I like, now if I could just BUY my warlock mount.. Still a little angry about that.