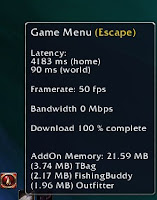 We had to call the raid last night because of lousy DPS on even the easiest BH bosses. Here's the culprit.4 second latency.The raid went something like this:
3 attempts at the boss and I called it. It was not going to happen. After about an hour of diagnosis, I was able to fix my problem.

Here's a basic idea of what I am working with:


To troubleshoot my issue:

Looking back, I should have noticed that the resubmits on wireshark detailed corruption on the line. I bet, 99% of the time this is a faulty or lose cable. Reseating all the cables in the switch and modem (yeah, the modem is hanging upside down) could have likely solved this issue.

Here's to a happier raid this Monday!

Update 9/26/2011 - After a short stint of really great Internet access, today, I tried to get onto the Internet over the weekend and it was down again. I believe they had hardware issues over the weekend and possibly replaced something on the back-end. When I called Comcast this morning, and they informed me after a little testing, that my modem had gone bad. I picked up a new modem from the local office and will be setting it up after work today. Hopefully, this solves my problem for good.
raid SSOTD