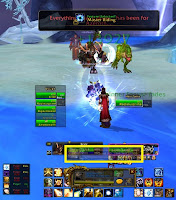 Just before midnight on June 19th, Eride reached level 80. It wasn't that momentous. We had just killed the second to last boss of Oculus and loot was being distributed. I almost completely missed grabbing a screenshot when it happened. Happily, I was able to switch to healer (green) dragon rather easily after a test wipe. Spam #1 on boss, then it's a warlock style health funnel (#3) on the party.

At 80:
So, will I be questing my way to rep with Hyjal? Oh, probably not. I think my best option will be continuing to running dungeons, then start questing in Deepholm. That way I can get the nifty shoulder enchants. (hyjal's are BOA, so I can mail them from Elk).
alt dungeon