- February 09, 2011
Looking through my current gear, my next biggest upgrade is my main-hand weapon. There appear to be two (or maybe 3) options available without raiding.
Modgud's blade drops off the first boss in Grim Batol, General Umbriss. The Spellblade, which has slightly better stats than the Heroic weapon, but has EXPENSIVE price tag (3 chaos orbs + 6 truegold bars + 3 Elementium bars). Considering I just sold a Truegold bar on the AH for 800g, that puts this weapon to have an estimated 5000g starting price. The 20% (or 8% in heroic) drop rate of Modgud's sounds much more cost effective. 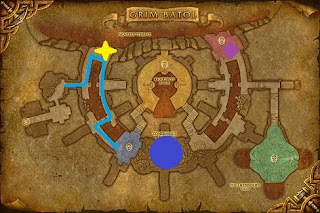 As I mentioned Umbriss is the first boss in Grim Batol. From the entrance, you face several groups of mixed trash (humans, dragonkin, fellpuppys and elementals), following catwalks down to him. (see my pretty blue line above?). In our festive little party, we had a restro shaman (earthbind and hex), pally, boomkin (hibernate), mage (polymorph) and myself (banish and fear macro'd) in our party. We laughed because at one point, we had all 5 mobs CCd and they all just stood there looking at us. "Who first??" Look at all those shiny raid icons!

At the star, you free 5 imprisoned drakes. You free one, mount it and it will immediately start flying down the pathway from star, to circle to diamond, then back. Your objective is to shoot fireballs (1 if you don't have a chat window active, doh) at as many mobs and wear them down. (Think Sunwell dailies) With effective shooting we knocked many down to 25% health. Made for cleaning trash between star and the boss easier. Note: If you have the quest to kill 30 troggs, make sure to be very effective at circle.

Umbriss from my POV was a rather straight forward fight. The fight is simply a DPS race to get him down. As a warlock, I had 3 responsibilities.
Umbriss was not cooperative last night and dropped the mail helm. Which no one wanted or needed. If I ask nicely, maybe I'll be able to find a guild group that will run the Normal mode boss until it drops?! :)
gear