- October 18, 2010
I was reading through some of my older email and found my official upgrade letter from Trial account to full account. Today is my 4th year anniversary paying World of Warcraft.(10-day trial excluded)


from billing@blizzard.com
to www.elkagorasa.info
date Wed, Oct 18, 2006 at 8:17 PM
subject Your WoW account has been upgraded.

You have successfully upgraded your World of Warcraft account.

This surprises me, as I hadn't realized I have been playing quite this long. Of course, if I take a peek at that /played command... /cringe
Ok, so a little maths, that's a pleasing, little over 1¼ hours played every day! Within those 525 minutes each week, there has been a number of memorable moments.  Looking through my screen shot scrapbook, I thought I'd share some of those moments with you.


January 2007
Level 32 - Warlock robe acquired from Menara Voidrender. This is a warlock's first epic quest chain. You need to travel back and forth between both continents and (for me) was quite a bit of work as I had not seen my first gold yet, needless a whole GOLD BAR! I remember running around with another high-level warlock to the various areas to gather the materials. Overall, it was a very handy robe, leveling up with Elk through at least 5 levels.

BC drops. I had just lost my RL job the first of the same month. I was busily job hunting, worried about maintaining my subscription to WoW, when BC drops. Of course, I had already prepaid for my copy, so I pick it up and play! Really slows down the job hunting, with my next employment coming in mid-February. TY Savings. I love the comment in Gamespot link from the BC release.


Who thinks anything else besides another WOW expansion will come out before 2010?

December 2007
Level 61 - Dreadsteed acquired - even more epic quest chain than the gold robe, this actually required friends to raid a level appropriate dungeon (at least for me). I was elated that another warlock in guild had purchased the candle, the bell and the wheel. The BOP equipment still cost a pretty penny. On the other hand, I love my flaming pretty pony.
July 2008
Guildie calls it quits! Never seen someone do this before?! People disappeared, but actually closing down their account? Tired of his long hours at work, getting impacted by playing Warcraft. This Karazhan raid was organized to wish him well. We all enjoyed delicious chocolate cake and got a present! Of course, late 2009, that same guildie returned.


October 2008 and October 2009
Epic flying - flying faster than the taxi service had eluded most characters all the way up to level 70. Only once you finally ding at 70 are you allowed to even purchase mount capable of keeping up with the taxi service. Elk reached 70 on October 6th. One year later, after gaining exalted status with all 5 horde cities, Elk completed the achievement for both the Leading the Cavalry and over Halloween last year, Long Strange Trip. As of this writing, I have 61 mounts, including 5 from PVP honor points. I'd still love to get the Mechano-hog and one of the rep mounts from CE and/or Argent Tourney.

Wrath drops. Now comes the crazy achievements system, those Heroic dungeons and then eventually ICC. Being at max level when the expansion dropped was liberating, in that I could immediately start questing in the new zones. Within a week, I was hitting the first dungeons and level 80 by January. As my gear very slowly improved, my guildies introduced me into the Heroics. Soon after that the Gundrak incident happened, which lead to the eventual spawning of ...

Elkagorasa.info launches. I had been blogging (about WoW) for years on my own personal site. I had be starting to work on separating the topics so that I wouldn't be tagged as a gamer site on my purely professional (aka work related) site. Around this time, I had a serious hardware failure on my old server, so I started using Blogger.com. Since then we've had a wonderful relationship, with them giving me lots of hard drive space and excellent availability. To date, I am happy to see that there are almost 850 unique pages viewed each month or 2,000 total views each month. You keep coming back and I'll keep providing you the latest and greatest (IMHO) warlock and Warcraft info I can find!!! 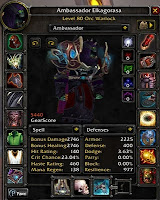 Start seriously checking out PVP scene. After reaching 80, I never felt compelled enough to join a full on raiding guild. I was quite content remaining in Order of Thought, which was 'friends and family' type guild, which contains mostly, well, friends and their families.Unfortunately, without raiding it was tremendously tedious to get gear upgrades. Averaging 8 frost badges a week was taking months to get a single new item.

PVP was a shock at first. People doing unpredictable things in order to achieve a goal. No longer are attackers reacting in reliable NPC-fashion. I stuck with it, building my gear up until I currently have around a 5400 gear score on my pvp gear (about the same as my PVE set). Now that I am delving into Arena also, I have seen a number of gear improvements, but unfortunately not much more winning. 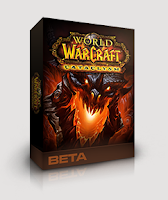 July 2010
I got invited to the Cataclysm Beta and started providing input on the 3rd expansion for World of Warcraft. This is my first game Beta, so I was not aware of what I'd see or how things would work out. To date, I've had to download the entire game twice, had random reboots and odd quest issues. Otherwise, it is fun trying out the new content. Frustrating, that there's not enough people playing to actually do the PVP and RDF related content.
July - October 2010 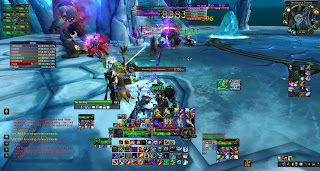 Elk starts regularly raiding ICC with OOT. In 4 years, this is the first time that a raid, starting at 9PM local was viable and relaible. Our little 10-man raid is actively attempting to take down Arthas. We are desperately trying to get the Kingslayer title before the 4.0 patch drops. Right now, we just need to get past LK Phase 3. The flight of the valkyries...


November December 2010(?)
Cataclysm releases and I will fly over Orgrimmar in my first flying mount (Blue Wind Rider from Level 70).
alt interest