- September 13, 2010
Just a few minutes ago, while working in Mt Hyjal, clearing dragonkin, I got a pst telling me that I was a #)(*@ RICHARD. All CAPS at that. Ouch! I was hurt, sorta. Best I could figure is this poor DK couldn't compete with my caster reach for tagging mobs. Sure, I ran around

In other news, I am still questing in Cata as destruction. I have respec'ed back into Improved Soul Fire, now that I found Soulburn makes it Instant Cast. The hard part is SB has an almost 45s CD (ATM).

The last patch brought some great UI improvements. First off, pieces of PowerAuras are visible. When Impowered Imp triggered, I saw this aura show up on my lock. (Edit: These UI updates are currently on the PTR servers for deployment, very very soon) 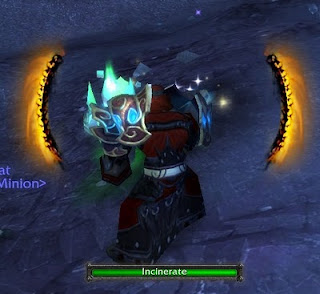 In addition, they have added spell specific actiavations, for example when something proc's. Here is Soul Fire's button around it after a SoulBurn. Personally, I love that this has been added to the game. I'd like make this configurable like that in PowerAuras. If so, I could configure things like Fel Armor falling off, or my Flask of Frost Wyrm needing refreshed.
questing