- April 30, 2010
Last night I joined a pug that was running several of the BC raids. (note: add as something to do when your regular ICC raid is canceled). As a group of 11-20 of decently geared level 80s, we breazed through Gruul's Lair, we flew through TK, we had a minor hiccup in SSC, but Felmyst in Sunwell caused full wipes about 6 times.


Our biggest hang-up with Felmyst is she does an aoe gas damage (similar to Skadi in UP) that you don't want to stand in. Difference is that this gas is a mind-control gas. First time we got hit, all but 2 people got hit, so we basically stood around wondering who to fight?? After another try or two, we got her down to 1%, then she went airborne. While airborne she is invincible. Raid leader believed that she could ONLY be killed after a full cycle of both phases. We finally managed to kill her without letting her ever leave the ground.So, use those haste trinkets and Potion of Speed and burn down her 4.5m health as quick as possible.
Now to go turn in my three Tier-5 warlock tokens for the set pieces! Go strut around Dal in the Corruptor set. The group was planning on continuing on tonight to do BT and Mt Hyjal. Hope I can make it, I'd really like to pickup the Malefic set. 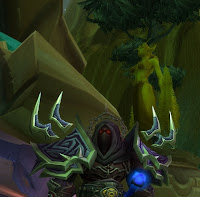 Update: My 3 tokens were two for pve gear and 1 for the pvp gear. :(  The lightening on these shoulders is rather cool, just not the same gruesome shoulders of the full corrupter set.
gear raid