Shadowlands is upon us and I have exactly 1 max level characters. I would love to play some of my many other characters, but I don't feel capable until I get my first hunter's legendary created.
Sadly the two "memories" that are considered BIS for BM hunters drop randomly from a dungeon. Update: I was finally able to grab a memory by running a M+7 Spires of Ascencion with friends.
The legendary creation tool is very novel. Pick a gear slot, combine with 1 ability, add 2 secondary stats, stir in a base item and some ash for glue and you have an i200 piece of gear!
I feel so behind the curve in gear and story plot. I played the opening slowly, now I feel 'everyone' is completing content several levels harder than I could successfully attempt.
Torghast Layer 3 feels like a struggle that I barely completed.
Torghast - RNG dungeon layout with RNG powerups sprinkled throughout.
LFR Castle Nathria's first 3 bosses are interesting. Some new mechanics.
Gearing has been slow. World Quest gear is 'time-gated' behind the story, not my average level. So WQ drops are useless in this in-between.
The most reliable option has been completing the story. I can usually add 8 levels to several covenant items, every 2 chapters. Upgrading requires ANIMA. Anima does not drop off of everything. It is a reward for somethings, like emissary boxes, er, callings.
I love that callings are usually similarly themed. "complete 3 WQ in Zone A" also tends to land with "Fill blue bar while doing things in Zone A"
I never understood why someone would xmog a shirt into hidden until I had to do it myself. Why? because it's free to wear it hidden vs having it take up a bag slot. Then if I ever want to xmog a shirt, I don't need to find one in my bags first. 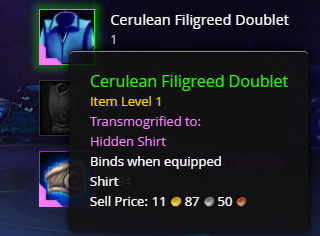