Showing posts from February, 2014
Show all

Tired of Getting DC'd & Running out of ideas...

- February 25, 2014
Since about patch 5.4.2, I've been getting disconnected from the game. It usually happens during group activity (scenario, dungeon, lfr). It usually happens during fights. Video driver? My first inclination was the issue was related to my video drivers. So I went to the NVidia site and downloaded the latest and greatest, stable drivers for my GTS 250 video card. No help. Hardware scan ... In the BIOS, my HP desktop has a 'system scan' option. This runs an integrity check on the system vitals, memory, drives, etc. Nothing. I even peeked into the Windows Event log to see if I am regularly getting any failures. Nope. Network traffic? The disconnect "looks" like I basically hit ESC on the keyboard, backing myself all the way out to the logon prompt.. I've ran a NetMon trace a few times to capture the disconnect, but nothing really stands out. Unfortunately the drop is random, so the log files do get rather substantial by the time it happens. Other users?
7 comments
Read more

Last night my priest (because the LFR had the bonus for healers), she ran LFR Gates of Retribution. She's fairly well geared (i525 average), but there are 2 items that she really, really wants. More so, she'd like to the tier pants of the Klaxxi in Downfall, but that's not the point. Instead what she got was gear she already has equipped, ie Shock Pulse Robes .  What I'd like to do, is not automatically win when I have the same gear already on. I have 2 cricket cages, I now have 2 Shock pulse robes... Sure, Sha Crystals when I disenchant them, but ... I dunno, I'd rather have the gold, or better odds on the gear I want.  Questions, If I take it did one of the other clothy casters NOT get it? Can I get a sort of DKP where I am more likely to get items that I want and/or need for future runs? Are valor points a sort of DKP for LFR? I'll probably go out and buy the, um, well, I already have one of those.. I'll probably just keep working on the ta
2 comments
Read more 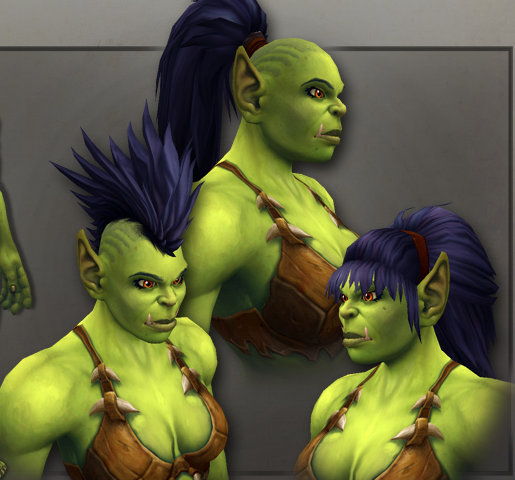 I could really see myself dusting off my old female orc rogue with the new character model changes coming in WoD. The new models are looking quite interesting. I love the level of detail that they will be getting. It's been way too long. Of the models released so far (or still to come), what are you most excited about?
1 comment
Read more

Lots of prediction on when the beta for Warlords will drop. Season 14 of Arena is coming to a close. Season 15 is the last season of MoP. PVP Season is 25 weeks. (see around 37 min mark ). Late August 2014?? F2P put up a nice timeline of the release dates. The 3 of the last 4 expansions have came out 15 months after announcement. Panda was noticeably quicker at 11 months. With Blizz wanting to churn them out 'faster', can we predict another 11 months this time?  October 2014? Is this new on the Warlord's site? Or has it always been there...
Post a Comment
Read more

Blizzard today opened up a online Gear Store. At the moment, I only see Paladin   and Priest tier gear, but I'd suspect that Warlock gear is coming soon! Of course, with this Orc's broad shoulders, "One size fits most" isn't good enough.
1 comment
Read more

Exalted with One, Now who?

Last night after running the dailies, my tailor finished off her rep with the August Celestials. Immediately, I hearthed back and picked up the pattern for the Royal Satchel . One for Elk and One for Eride. Yeah, immediately 4 more bag slots by replacing the Embersilk bag . Move the embersilk to bank slot, replacing 20 slot bag. This got me thinking, what other rep can I easily work on? On thing for sure, Eride needs her " Black Prince " rep. Through no intentional means, Elk is Honored without even trying. Probably from LFR raids and killing all those Klaxxi? One trick I found on Wowhead via the comments was to run successive runs of a daily quest for the Shadow Pan . It's a bit of a cheat personally; run quest, abandon and run again, but you can easily make 1000 per run (100 kills at 10-15 rep each).  Combine that with the current DMF " Whee !" buff and you'll make another 100 rep each run!! :D Elk has moved on to building his Order of Cloud Serpent
Post a Comment
Read more
More posts