Topic 21: What's in your backpack?

As my children start preparing for school starting up again in t-minus 30 days, I found this blog-topic keenly interesting..

My oldest is in high-school and has learned the fine-art of carrying around only what's absolutely necessary. That includes only a pencil or pen, and a notebook. My son who's just starting middle-school (i.e. 6th grade) I imagine that his backpack is going to be stuffed full and weighing in at 11kg (25lbs). My alt and my main fit into both of these categories. So, What's in my backpack??  (I am just glad you didn't ask What's in my bank!?). 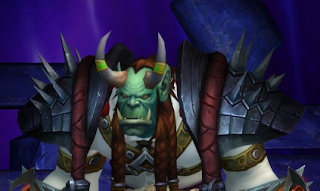 As this site's namesake (and my former, but stil active main), I am a bit more sloppy with his bags. He has quest items that I don't know what quest they belong to any more. He has three different gear sets because I still haven't quite settled on a spec yet (affliction this month, destruction last month). Topping it off, his gear is often highly in flux, so he is often carrying a slightly lower ilevel or higher ilevel of a matching items in order to maximize output. Top it off, Elk is also an alchemist, cook and herbalist, so at any times has potions, cooked food and crafting supplies that he recently acquired. Often the mats land in the regent tab of the bank, but sometimes not.

While also carrying around 3 (partial) sets of gear, her bags tend to be a little cleaner. She is quite a bit more brutal with emptying what she's carrying around. One bag dedicated to quest items (i.e. those darn class-hall items that require running a raid or dungeon instance). Backpack containing vendor fodder (grey items and soulbound below ilevel gear). Lastly, one to two stacks of stat food and those augment runes. Overall, there's nothing really hanging on too long in her bags.

With the constant influx of items into their bags, it's quite a task to keep their bags sparkly clean and fresh. There are always items to be vendored, things to mailed to bank alts, and stuff that could be important to functioning later on.

As I've stated before, I am an avid user of this service. Mr Robot takes my bag and bank content and churns out my best-in-bag items. From this I take this build and import it back into game where Mr Robot then creates gear builds using WoW's native closet option. Skimming my bags, I can see AMR Holy, AMR Retribution, or AMR Protection tags on all of my gear. This in turn, means that all gear NOT tagged, is up for sale. Sure, I take some consideration and don't delete anything that's within 5 ilevel of my current item, but with timewalking gear, and world quests still dropping 855 gear, it's an easy purge.

This add-on simply sells junk. It's configurable with some 'smart' options to auto-sell items when talking to valid vendors. I personally have some rather aggressive settings where it will sell all grey items, soulbound items that are too low for my current average ilevel and soulbound inappropriate gear (pally's really don't wear plaid). This is typically a life saver of an add-on. Mount up on my handy-dandy mammoth, talk to that repair vendor to both clean the bags and fix my stuff. Sadly this has bit me a few times. Class hall mount needs a crafted LW item, a "barding". I bought one off the AH only to have it sold when I next visited a vendor. Bought a second one, then realized what happened, and found it in my 'buy back' tab. You can teach SCRAP to not do this, but it requires training. It still auto-sells goblin gliders on me, but now that I have flying, that's more of an inconvenience... :(

While this may be a given, but I extensively use the bank for secondary storage. I absolutely love the 'regents' tab option and will often visit the bank to click that button to purge all crafting items. I am also putting all my possible upgrades in here for a short time. Mr Robot has a habit of not really liking the specs of a higher ilevel item, simply because it's badly spec'd out. For example, that 915 trinket that had lots of versatility when it wasn't popular, so I keep running the 855 item.
ZandCinder