After the compromise last week on no-flying ever again, I decided it was ok to restart the rep grinds for mounts. Flying out to Netherwing ledge reminded me of the Sha'tari Skyguard and their mountable rays. I remember hating working on this rep at level and had only made it to Friendly.

Over the weekend, I read through the guide "Nether Ray in a Day". This guide details all of the quests that are available for this faction. One commenter pointed out that you can technically you only need to do the repeatable quests (if you don't care about other faction reps).

So I flew up and started the grind. Some hints if you're just starting.


I found the 'towers' had the best collection of mobs. Typically there would be one wandering sketti, plus 4-5 of the time-lost variety. Kill them, plus loot 2-3 time-lost scrolls. Rinse and repeat until I have 40+ scrolls, then visit 4 of the purple circles to summon each of the mini-bosses. Fly back to quest hub, turn in the 4 tokens, turn in all my dust, then repeat my rounds. Checking the Terrok circle to see if he's ready to respawn. In about an hour, I easily had about 5,000 rep. (About long enough for the DPS queue to pop!)

Over the weekend, I put in a few hours, and burned through Friendly all the way to 7000 into Revered. Friday and Saturday using the DMF Whee buff, Sunday without. I imagine that I'll need about another 2 hours of repeating this process to reach Exalted.

Update: About 40 minutes - hour, local time midnight, server time 2am. Went from 6600 to 13370 rep doing 2 daily quests (escort, bombing run) plus two Terrok kills, and grinding out the materials for 2 more kills next time. Terrok is on a 15 min timer after last kill. So I triggered the stopwatch after each kill and made it for the next. Would have gotten a 3rd, but was late by 2 seconds.. :)

Update: Spent about 90 minutes this morning and finished this faction off. This included 3 Terrok kills (using the stopwatch). Had to compete with 2 other people for kills, but one was a level 70-ish warlock, so I took sympathy and helped with a little rain of fire over his kills. 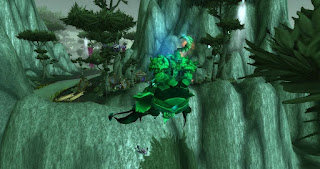