- May 20, 2015
Last night, after I finished my dailies for the Netherwing, I decided to go run Ulduar for both the achievement mount and hopefully, Mimiron's head. 30 minutes of emptying bags, and turning in quest items, I finally show up at the entrance of Ulduar. I then spent the next 3 hours gathering achievements, until I had to give up for the day (2am local) and go get some sleep.

Let's start here.This quick 6 minute long video is based on running with a level 100 toon. This is extremely helpful in seeing the fights from that perspective before hand..

I still haven't attempted these achievements. Running around the raid last night was getting tedious and I was lost. I think I see where I messed up for Mimiron. I took the tram to the second location, thought I was coming up to Yogg so I ported back to the entrance area..

Checking WoWHead (combined with using their addon), I see I can filter on all the achievements still outstanding within this raid. First off, search for "10-Player" returns only the achievements that can be earned on, well, 10-player mode. Second by right-clicking on the "Completion" column, I can filter it for "=0" or incomplete achievements. 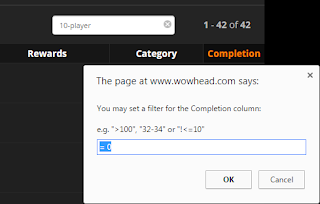